Within one hour in West Bank: Car ramming attack and stabbing 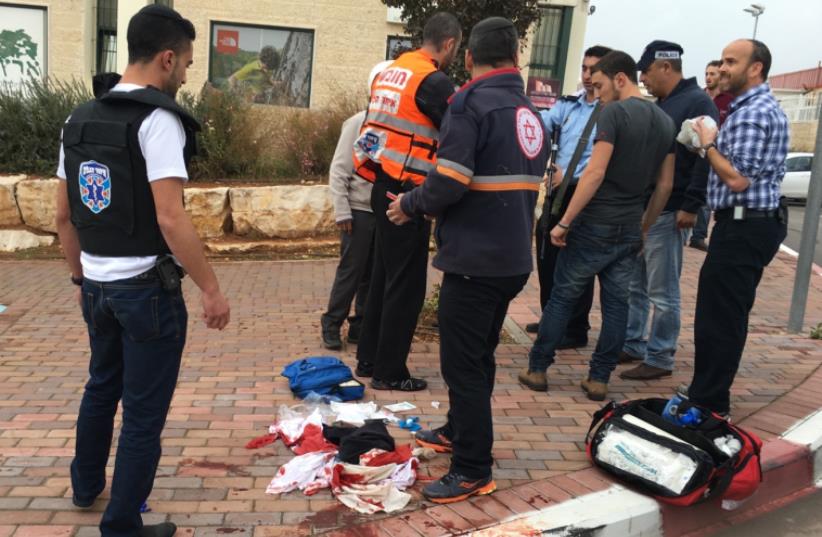 Terror attack at Sha'ar Binyamin industrial park Nov 6, 2015
(photo credit: KBUZTAT MEDABRIM TAKSHORET)
Advertisement
Two terror attacks occurred within one hour of each other in the West Bank on Friday.In the first attack, IDF soldiers stationed at Khalhoul Bridge in the West Bank fired on and stuck a Palestinian female motorist they suspected of attempting to run them over.The incident began when a suspicious vehicle drove at the soldiers, an army spokeswoman said, prompting soldiers from the Haruv Battalion, a part of the Kfir Infantry Brigade, to fire at the car.
Stabbing attack Sha"ar Binyamin Industrial Park Nov 6, 2015
According to Palestinian reports, the suspect, 72, died of her wounds while being treated at the hospital. In the second attack, an Israeli civilian sustained moderate to serious injures in a terrorist knife attack that occurred near the Sha'ar Binyamin area in the West Bank.A terrorist stabbed the civilian near the Rami Levi store and fled the scene. IDF units were searching the area for the attacker.Magen David Adom paramedics reported finding a man in serious condition with stab wounds to his upper body. Paramedics began treating the stab victim before evacuating him to hospital.Earlier in the week, a 20-year-old Border Police officer was critically wounded in a suspected car-ramming attack near the location of the Friday Khalhoul incident.The officer has very serious head injuries and injuries to his extremities and doctors were fighting for his life, according to Hadassah-University Medical Center in Jerusalem’s Ein Kerem.The attack took place at around 4 p.m. on Wednesday, on Route 60 near the Palestinian town of Halhoul, north of Hebron. In security camera footage, the vehicle can be seen approaching a curve in the road and then speeding up and swerving into a group of security personnel.

Yasser Okbi contributed to this report