Prime Minister Benjamin Netanyahu: "The fighters in the police, Border Police, IDF and Shin Bet [Israel Security Agency] are acting with courage and determination against the attackers."

Scene of stabbing in Ariel
Advertisement
Two security guards and three soldiers were wounded in four separate incidents in the West Bank on Thursday. Four Palestinian assailants were killed by security forces.Prime Minister Benjamin Netanyahu praised the response of the security forces in combating the wave of Palestinian terrorism that began three months ago when he spoke on Thursday evening at an event in Jerusalem marking 25 years since the beginning of the massive wave of immigration from the former Soviet Union.“The fighters in the police, Border Police, IDF and Shin Bet [Israel Security Agency] are acting with courage and determination against the attackers,” he said. “In parallel, the Palestinian Authority is continuing its mendacious incitement against Israel, and is certainly not working against it [the incitement].”Netanyahu said the security forces have full freedom of action in the territories. They go everywhere they need to go, making arrests and demolishing the homes of terrorists.“We are acting against the families cooperating with the attackers – taking away their freedom of movement, imposing closures on their villages and closing off roads. We are also acting against incitement on social media,” Netanyahu said.Thursday’s violence began in the morning, when Muhammad Abdel Hamid Zahran, 23, from Kufr al-Dik, stabbed two security guards at the entrance to the settlement of Ariel, next to the city’s industrial park.Both of the 24-year-old guards suffered stab wounds to their upper bodies that left one in serious condition and one in moderate condition. They were evacuated to Rabin Medical Center-Beilinson Campus in Petah Tikva.From the hospital, one of the guards – a white bandage wrapped around her head – said that after Zahran stabbed her, she managed to take out her gun and shoot him until he fell on the ground. The two guards locked themselves in the guard house until security forces arrived. Zahran died from the gunshot wounds.At around 10 a.m., shortly after the Ariel attack, Eyad Jamal Edaisat, 25, from Hebron, attempted to stab a soldier with a screwdriver at a checkpoint at Hakvasim junction in the South Hebron Hills. Nearby soldiers fatally shot the attacker before he was able to reach them, the army said. There were no injuries among security personnel.Two hours later, around noon, Wissam Abu Ghawileh, 22, from Kalandiya, tried to mow down Border Police and soldiers with a car, just outside the Rama army base, located by the Adam junction in Samaria.The Border Police released a statement made by “A.,” the commander of the Border Police officers who shot and killed the attacker, who explained that the attack occurred as the security forces were leaving the base on a routine mission.“We saw a vehicle veer toward us on the path leading to the base, which is used only by people approaching the base, which left us with no doubt that this was a vehicular attack. The fighters actually leapt in the direction of a nearby shelter while we shot at the terrorist until he was neutralized,” A. said.One officer lightly wounded in the incident was treated at the scene with an injury to one of his hands. 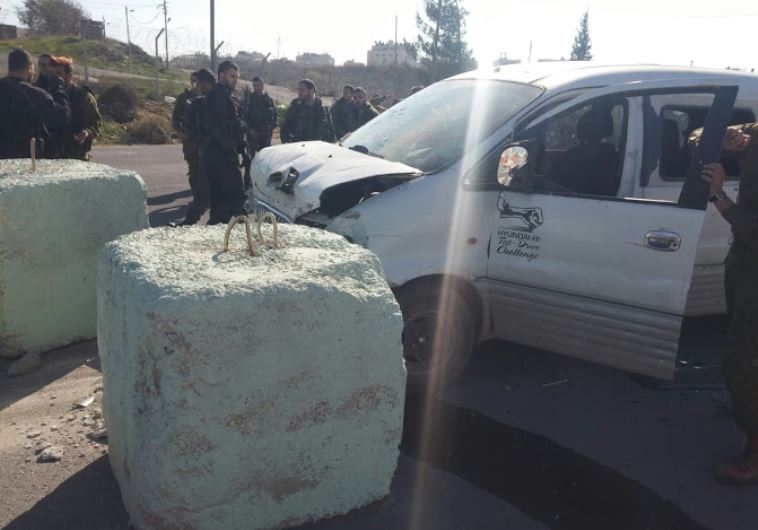 Scene of vehicular attack at the entrance to the Rama outpostSeparately, during a Palestinian riot that broke out in the Kalandiya refugee camp, the IDF killed a Palestinian gunman, Bilal Omar Zayed, 23. The soldiers had entered the camp to arrest two Palestinians for their suspected involvement in a shooting attack against Israelis.The Palestinian gunman fired at the soldiers while they were in the camp, an army spokeswoman said. Soldiers returned fire, and it is believed that Zayed was killed at this point. After the exchange of fire, a large-scale disturbance ensued in which local residents threw rocks and fire bombs, wounding two soldiers.Anas Odeh, who saw the incident, said that the Palestinian gunman had been the first to move toward the soldiers.“Everyone thought that soldiers stepped back. Bilal was the first to move forward, facing the soldiers. They shot him here [in the head]. After Bilal fell down, [the soldiers] fired more shots, so no one comes close to him,” said Odeh.Hundreds of Palestinians participated in his funeral in Kalandiya.Reuters and Khaled Abu Toameh contributed to this report.