Is the ‘stabbing intifada’ back? 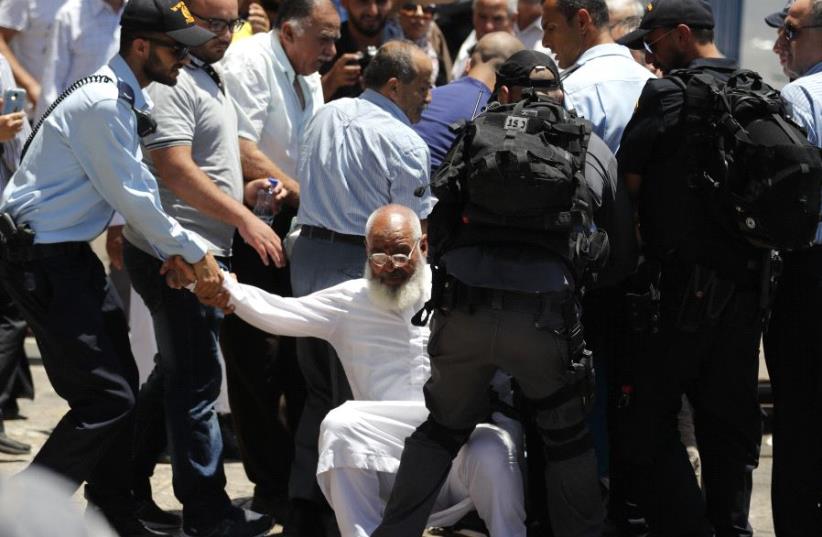 Israeli security forces and Palestinians scuffle in Jerusalem after Temple Mount closure
(photo credit: THOMAS COEX / AFP)
Advertisement
Just as when Ariel Sharon ascended the Temple Mount in 2000, the raw nerve of al-Aksa has been touched among Palestinians with the installation of metal detectors at entrances to the site, setting off a new surge of violent unrest, including Friday night’s deadly attack in Halamish.Barring a reassessment of Israeli policy, what happens next will largely depend on the stance of Palestinian Authority President Mahmoud Abbas, who on Friday night suspended all contact with Israel until the metal detectors are removed.
PA President Mahmoud Abbas cuts off ties with Israel
While such a furor over metal detectors – installed after two policemen were killed on the Mount nine days ago – may seem unfounded to Israelis, Palestinians have had long-standing suspicions that Israel seeks to harm the mosque, and some have demonstrated they are prepared to die in what they view as defense of al-Aksa.“Al-Aksa is a place heavily charged with emotions, people are willing to die for it and become martyrs going to heaven. A lot of Palestinians feel they are defending al-Aksa on behalf of all Muslims,” said Samir Awad, a political scientist at Bir Zeit University north of Ramallah. “Palestinians consider al-Aksa the gem of their future state. It signifies Palestine itself. Palestinians don’t want to be caught off guard, they don’t want to fail in protecting al-Aksa.”Indeed, Omar al-Abed, the 19-year-old from Kobar village who stabbed to death Yoel Salomon, and his adult children Chaya and Elad, in Halamish on Friday night wrote on Facebook that he was answering “the call of al-Aksa” and was willing to die. There are many potential Omar al-Abed’s out there, and his attack may be the prototype for violence by individual zealots that will continue as long as the tensions around al-Aksa remain so high.“There are many individuals who can do it alone without the direction of leadership.Even if he was in an organization, he didn’t act according to the decision of leadership, he moved alone,” explained Talal Awkal, a columnist for the Ramallah-based Al-Ayyam newspaper. “Many will try similar attacks.“I expect a popular, general intifada,” Awkal said. “In this intifada, the individuals will do much more than the factions. They will take the responsibility to confront the Israelis.”He predicted that a surge in stone-throwing involving many participants at Israeli targets in the West Bank will accompany the individual attacks. “The settlers and the army are everywhere so the popular confrontation is available all the time.”The anger over al-Aksa is layered over long-standing bitterness due to the failure of the peace process to yield an end to Israeli rule and a widespread sense of hopelessness about the future. It is a really combustible situation.In late 2015, when there was a surge of individual Palestinian violence, Abbas generally exerted a restraining influence despite being charged by Israeli officials with incitement.Indeed, PA police at times intervened to prevent demonstrators from reaching Israeli Army positions and Abbas himself made only brief public references to the unrest.Now, Abbas’s posture will again be crucial in determining how bad the violence gets.So far, it cannot be taken for granted that he will restrain his charged-up public in the same way he did previously.Indeed, on Friday night he declared the suspension of all contact with the Israeli side “at all levels until Israel commits to canceling the steps it has taken against our Palestinian people, generally, and the city of Jerusalem and al-Aksa mosque, in particular, and to safeguard the historic and legal situation of al-Aksa Mosque.”But Abbas went beyond that, alleging that Israel is, in fact, trying to tamper with the mosque.He spoke of “our rejection of what is called the metal doors that are political steps wrapped in an illusory security covering aimed at imposing control over al-Aksa Mosque and fleeing from the peace process and its requirements, changing the conflict from political to religious and dividing al-Aksa Mosque time-wise and spatially.”Awad, the Bir Zeit University scholar, said Abbas’s posture is a response to the charged-up Palestinian streets. This time, emotions are so charged he cannot order his security forces to block demonstrators from confronting Israeli troops, Awad said.“He can’t do that. He doesn’t want to be viewed as standing with Israel against his people. If Palestinian police clash with demonstrators, Abbas loses legitimacy and power and he doesn’t want to be in that situation.”What Abbas will do, Awad predicted, is “intensify contacts with Jordan, Egypt and Turkey to try to bring Israel back to reason. But the Palestinian street is very volatile. Things can go wrong at any time.”Whether Abbas’s initial posture is maintained remains to be seen. Brig.-Gen. (res.) Gadi Zohar, former head of the IDF’s Civil Administration, said the Palestinian Authority under Abbas remains opposed to an intifada, something that he said made the situation today different from in 2000 under Yasser Arafat.“It’s not the same situation, but we have entered the very strong religious component of al-Aksa and that is a recipe for outbreaks and tensions.”The three Palestinians who died in clashes Friday were depicted in the Palestinian media as having died “on behalf of al-Aksa.”The Halamish attack, said Zohar, “can be the signal for what we will see in the months ahead.”“We really need to expect that the government of Israel will find a way to calm things not just with force, but with rethinking the response on the Temple Mount especially on the issue of the metal detectors,” he said.