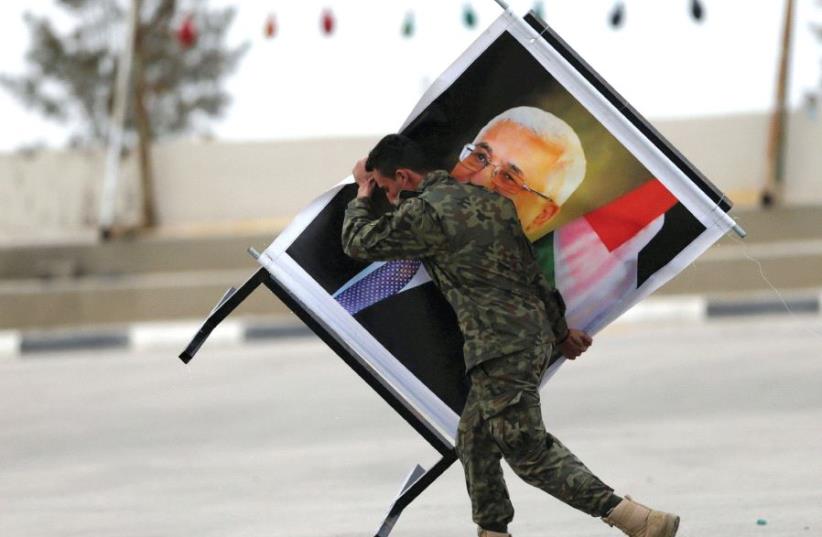 A member of the Palestinian National Security Forces carries a picture of PA President Mahmoud Abbas during a graduation ceremony in Jericho last month
(photo credit: REUTERS)
Advertisement
Israeli security forces arrested a senior Palestinian Authority security official on Friday for sending his forces into east Jerusalem to carry out arrests, an Israeli security official said on Sunday.The security official named the PA security official as Ali Qaimiri, who serves as head of the PA Police in the Jerusalem outskirts and holds the rank of colonel.“[Qaimiri] sent his forces into east Jerusalem to carry out arrests of blue-ID card holders,” the security official said, referring to Palestinian residents who hold Israeli residency cards.The official declined to elaborate on the circumstances surrounding Qaimiri’s case, stating that an “investigation is ongoing.”A PA security official confirmed that Israel arrested Qaimiri near Gush Etzion on Friday evening and subsequently transferred him to a jail in downtown Jerusalem.The official added that Qaimiri was scheduled to appear before an Israeli court on Monday.Qaimiri’s arrest came two days after the Israel Police and Shin Bet (Israel Security Agency) detained two residents of east Jerusalem for allegedly working on behalf of the PA security services.A Jerusalem Police spokeswoman on Wednesday said the two residents had been “operating against residents of east Jerusalem,” without providing additional details.When asked on Sunday if the arrest of the two residents on Wednesday was connected to Qaimiri’s detention on Friday, the spokeswoman said there was no link between the two cases.The PA security official denied that Qaimiri had sent forces into east Jerusalem.“We do not operate there,” the official said. “It is outside of our jurisdiction.”The official also objected to Israel arresting Qaimiri, asserting that it would have been more appropriate for Israel try to address its concerns through dialogue with the PA Police.“Frankly, arresting him was not the right way for them to handle this situation,” he said. “They could have contacted us to express their concerns and we could have reached a resolution in a civil way.”While Israel has previously arrested entry-level members of the PA security forces, it has not, in recent memory, detained a member of the forces at a rank similar to that of Qaimiri.