The office will be shuttered for a minimum of six months, pending an ongoing investigation into illegal activities. 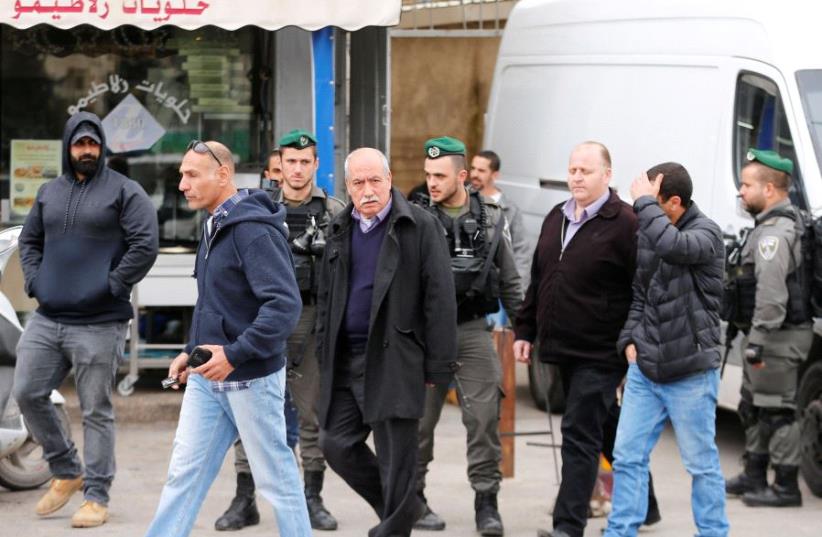 Palestinian geographer Khalil Tafakji (C), who runs a Palestinian map office, is detained by Israeli security officers as they carry out an Israeli police order to close the office
(photo credit: REUTERS)
Advertisement
Citing a breach of Israeli sovereignty and intimidation tactics, Interior Minister Gilad Erdan on Tuesday ordered the immediate closure of a Palestinian Authority-funded map office in east Jerusalem accused of monitoring Arab property sales to Jews in the capital.In a statement, Erdan said the Beit Hanina facility recorded the names of Palestinians – who sold, or planned to sell, land to Israeli Jews – for retribution.Khalil Tafakji, 65, who oversaw the office, was arrested Tuesday morning.
Israel shutters Palestinian office in Jerusalem accused of monitoring Arab land sales to Jews (credit: REUTERS)
Police also seized computers and documents from the location.“The Palestinian maps office activity is part of a PA plan to harm our sovereignty in Jerusalem, and to terrorize the Arabs who sell real estate properties to Jews in the city,” Erdan said.“Police found that the agency sends the names of people who wish to sell land and houses in east Jerusalem to security services in Ramallah, where an investigation is carried out on behalf of the Palestinian Authority.”The office will be shuttered for a minimum of six months pending an ongoing investigation into illegal activities.“I will continue to act firmly to prevent any Palestinian government foothold in Jerusalem,” Erdan vowed.Saeb Erekat, chief negotiator for the Palestinian Authority, condemned the closure as unlawful.“We strongly condemn the illegitimate closure of the Mapping and Geographic Information Systems Department of the Arab Studies Society and the illegal detention of Mr.Khalil Tafakji this morning in occupied east Jerusalem,” he said in a statement.“Mr. Tafakji is a distinguished scholar from Jerusalem and the director of this academic department within the previously forcibly sealed-off Orient House, in the heart of occupied east Jerusalem.”According to Erekat, Tafakji has served on several initiatives related to the Middle East peace process.“This provocative act by the Israeli occupying forces is a reminder of Israel’s ongoing campaign to deprive Palestinians in occupied east Jerusalem, the capital of the State of Palestine, of any voice, of its national institutions and organizations, in an effort to erase any Palestinian presence in the city,” he said. “Israel, the occupying power, continues to violate its obligations under signed agreements, as well as its commitments vis-à-vis the international community. More than 20 Palestinian institutions in east Jerusalem, including notably the Orient House and the Chamber of Commerce, remain forcibly closed by Israeli occupying orders and raids since 2001, in violation of international law.”Moreover, Erekat described the forced closure and arrest as an “escalation,” designed to “bury the two-state solution, consolidate Israel’s apartheid regime in the occupied city, as well as in the rest of occupied Palestine, and create a Palestinian demographic minority. This serious escalation demands that the international community urgently takes concrete measures to reopen Palestinian institutions in occupied east Jerusalem, in line with international law and UN resolutions.”PA spokesman Yousif Mahmoud added that the closure of the maps office and arrest of Tafakji is part of the “escalation against Jerusalemite institutions, and against occupied east Jerusalem, more generally.”Adam Rasgon contributed to this report.