Ambassador Gary Koren was asked to speak to Russian officials in regard to Israel’s alleged air strike in Syria near the city of Palmyra earlier in the week. 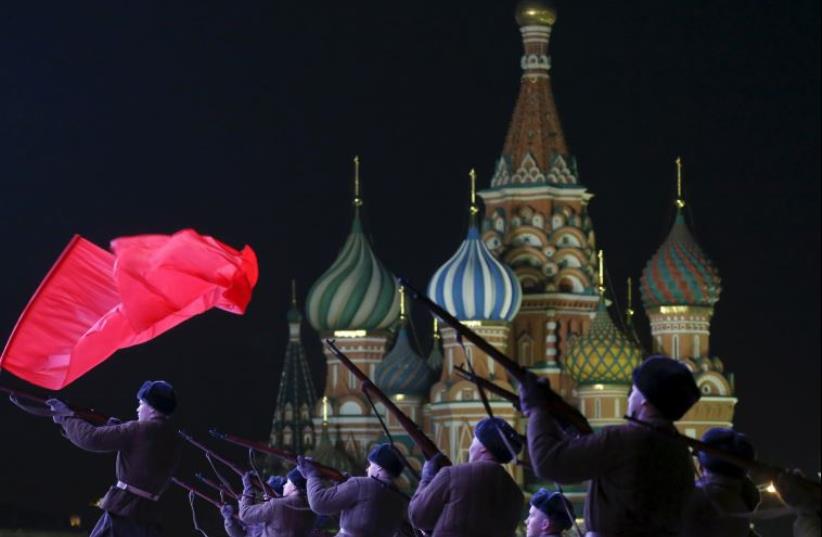 Russian servicemen, dressed in historical uniforms, take part in a military parade rehearsal in front of St. Basil's Cathedral in Red Square in central Moscow
(photo credit: REUTERS)
Advertisement
The Foreign Ministry denied Hebrew media reports on Monday that Israel's ambassador to Russia was summoned to speak with Moscow government officials for a second time in less than a week. Ministry spokesperson, Emmanuel Nashon, told The Jerusalem Post that the reports "were not true."Russian news agency Interfax, however, quoted a ministry official as saying on Monday that Moscow had summoned Israel's ambassador for clarification on an Israeli military strike near the Syrian city of Palmyra. Hours earlier, Syrian media reported that Israeli forces had struck Hezbollah targets on the Syrian-Lebanese border, allegedly the second such action in one week.The reported assault came just a day after an Israeli drone reportedly struck a vehicle in the Quneitra countryside, killing the driver, Yasser al-Sayed, who was a commander in Syria’s air defense unit, according to Channel 2 on Sunday.Syrian media reported earlier on Sunday that regime forces had “repelled” an Israeli reconnaissance drone near the town of Khan Arnaba, close to where Friday morning’s Israel Air Force strike allegedly occurred.The air force’s Arrow anti-aircraft missile defense system intercepted a Syrian SA-5 missile fired at Israeli jets on Friday night. The jets had already returned to Israeli airspace when they were attacked, after striking targets in Syria.Later on Friday, Ambassador Gary Koren was asked to speak to Russian officials in regard to Israel’s air strike in Syria near the city of Palmyra.According to Channel 2, the strike hit close to Russian troops. The Foreign Ministry confirmed Koren’s meeting with the Russians, just one day after the ambassador presented his credentials, but did not expand on its content. Following this weekend's events, Syrian UN Ambassador Bashar al Jafari said in a statement Monday that "[Israel] changed the rules of the game... Next time Israel will need to think a million times over before striking in Syria."Maariv Online and Anna Ahronheim contributed to this report.