The small fleet of 2 vessels is slated to carry dozens of women from various nations, including Israel, with the aim of breaching Israel's naval blockade of the Strip.

Gaza flotilla
(photo credit: MAHMUD HAMS / AFP)
Advertisement
Despite the recent reconciliation of ties between Israel and Turkey, it appears that the controversial Gaza-bound flotilla movement has yet to subside. An activist flotilla sailing under the banner "Mujeres Rumbo a Gaza" (Women's Boat to Gaza) was set to anchor off from Barcelona on Wednesday evening toward the Gaza Strip.The small fleet of two vessels was slated to carry dozens of women from various nations, including Israel, with the aim of breaching and boycotting Israel's naval blockade of the coastal Palestinian enclave. Meanwhile, Israel was prepared to thwart the flotilla from illegally infringing on the maritime blockade of Gaza, which was established in 2009, two years after the terrorist group Hamas's takeover of the Strip. 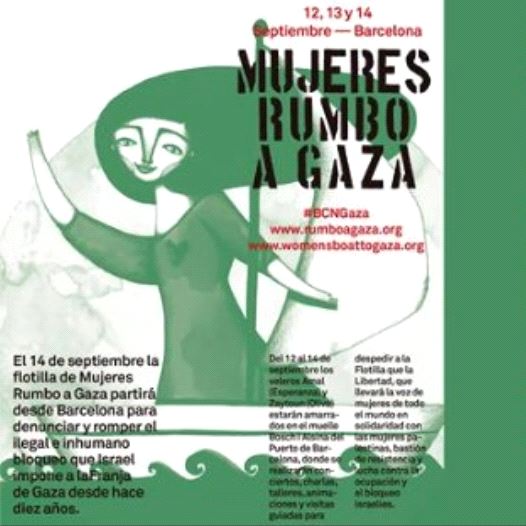 A diplomatic source on Sunday told The Jerusalem Post's Hebrew sister publication Ma'ariv that the Foreign Ministry was doing its utmost to deal with the matter. The source added that the ministry's efforts sought to minimize possible diplomatic and media harm caused by the flotilla.  Israel and Egypt have also implemented a ground and aerial blockade of Gaza to thwart weapons and rocket materials from reaching the hands of terrorist entities.With the capacity to haul 15 passengers each, the Amal (Hope) and the Zaytouna (Olive) sail boats were expected to dock at various ports on their journey across the Mediterranean. After setting sail from Barcelona following two days of anti-Israel events and lectures, the boats were slated to first stop in Corsica. Among the pro-Palestinian activists due to board the vessels were European Parliament member Malin Bjork from Sweden, retired US army colonel Ann Wright and doctor Fouzia Hassan from Malaysia. Among the Israeli nationals expected to take part in the flotilla was the media spokeswoman for controversial Arab-Israeli MK Haneen Zoabi (Joint List), who was on the 2010 Turkish Mavi Marmara flotilla.In June, Israel and Turkey mended a six-year rift sparked by the Mavi Marmara incident, in which 10 Turkish citizens were killed attacking Israeli commandos.Israel fears such flotillas could be used to transport materials to Gaza that could be used by terrorists to manufacture weapons and militant infrastructure.
Gaza-bound flotilla boat docks in Ashdod after interception by Israel
Last June, the Israeli Navy intercepted a Swedish flotilla boat off the coast of Gaza without incident and towed the vessel into the Ashdod Port.