Palestinians from the nearby village of Jalud who claim ownership to some of the land within the settlement’s boundaries have filed an objection against the plan. 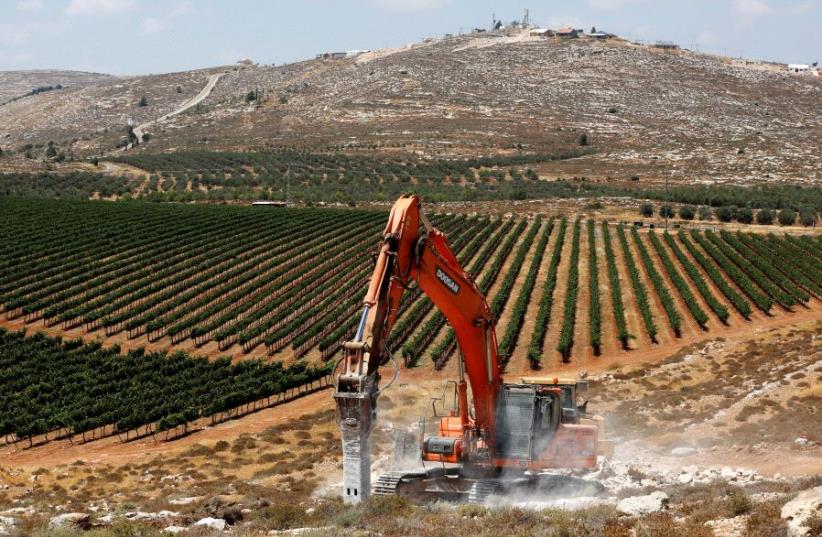 Heavy machinery work on a field as they begin construction work of Amichai, a new settlement which will house some 300 Jewish settlers evicted in February from the illegal West Bank settlement of Amona, in the West Bank June 20, 2017.
(photo credit: REUTERS/Ronen Zvulun)
Advertisement
The government is set to approve an additional NIS 55 million budget for the initial construction of the newly created Amihai settlement for the Amona evacuees. This comes atop NIS 60 million that have already been spent on the project.The government will also be asked to provide an additional NIS 5 million to temporarily house the 40 Amona families until their permanent homes are built.Security forces forcibly evicted the 40 families from the Amona outpost in February after the High Court of Justice ruled that their hilltop community, on the outskirts of the Ofra settlement, was illegally built on private Palestinian property.The families have been housed since then in the Ofra field school. In March the government approved construction of an entirely new settlement for the Amona families, calling it Amihai, which will be build next to Shiloh in the Binyamin region of the West Bank.But work on that site has since come to a standstill because of lack of funds.Concurrent to the initial construction work, the Higher Planning Council for Judea and Samaria is working to approve a zoning and building plan for the settlement.Palestinians from the nearby village of Jalud, who claim ownership to some of the land within the settlement’s boundaries, have filed an objection with the council against the plan.The village has also petitioned the High Court of Justice against the plan.Initial construction work on the settlement has been allowed to move forward in spite of the lack of bureaucratic approvals and the pending court case.