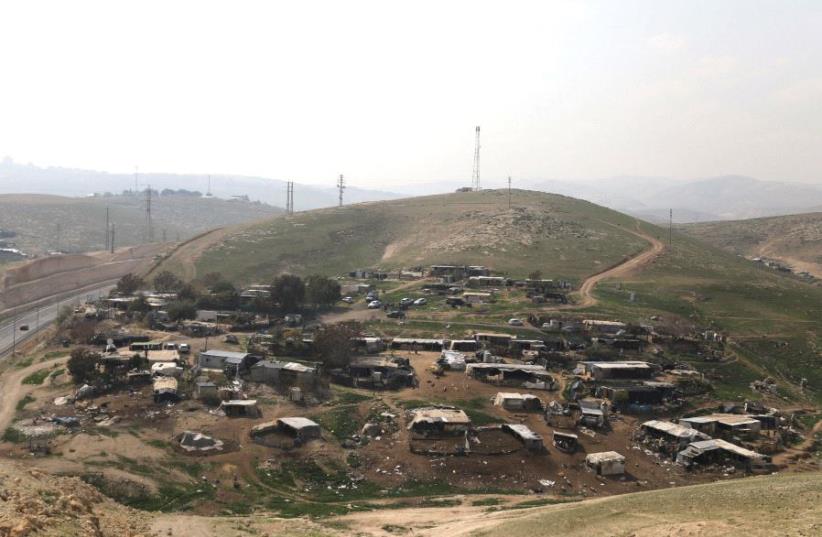 Dwellings belongings to Bedouin are seen in al-Khan al-Ahmar village near the West Bank city of Jericho February 23, 2017
(photo credit: REUTERS)
Advertisement
KHAN AL-AHMAR, West Bank - Israel on Sunday told residents of Khan al-Ahmar, a Bedouin village in the West Bank slated for demolition, to clear their houses by Oct. 1.Khan al-Ahmar consists of tin and wood shacks built on a desert hillside beside an Israeli highway that runs from Jerusalem to the Dead Sea.Israel plans to demolish the village and relocate its 180 residents - Bedouins who scrape a living by raising sheep and goats - to a site 12 kilometers (7 miles) away, near the Palestinian village of Abu Dis and adjacent to a landfill site.The move has drawn criticism from Palestinians and some European states, who cite the impact on the community and prospects for peace.A spokeswoman for Israel's military liaison agency with the Palestinians said no date had been set for demolition should the houses remain after the deadline.Israeli security forces on Sunday morning handed out letters telling residents to voluntarily take down the buildings by Oct. 1 or Israeli authorities would enforce the demolition orders."We will not voluntarily evacuate the place," said village resident Faisal Abu Dahuk. "The occupation forces that have an army and weapons can evacuate us by force, but there is no other place to go and we refuse to be moved anywhere else."Israel's Supreme Court has rejected petitions to prevent the move, siding with the authorities which say the village was built without the required permits. Palestinians say such documents are impossible to obtain.Palestinians say the demolition is part of an Israeli push to create an arc of settlements that would effectively cut off East Jerusalem from the West Bank.