“We seek to revive the initiative in public [discourse] and with government officials since Israel has not officially replied to the offer and is not interested in paying the price.” 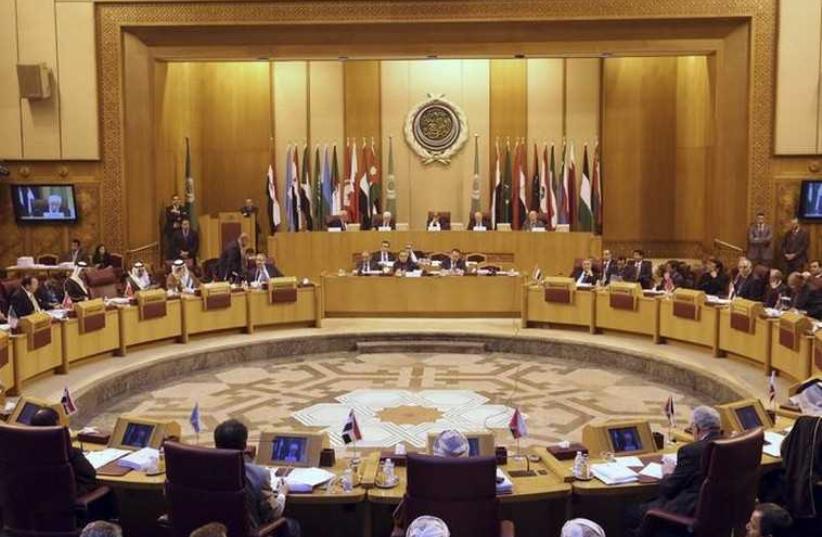 Arab leaders meet at an Arab League meeting
(photo credit: REUTERS)
Advertisement
An Israeli think tank is seeking to resuscitate the Arab Peace Initiative in the minds of the public and decision makers to help promote the revival of the peace process, chairman Nimrod Goren told The Jerusalem Post on Tuesday.“We seek to revive the initiative in public [discourse] and with government officials since Israel has not officially replied to the offer and is not interested in paying the price,” said Goren, founder and chairman of Mitvim – The Israeli Institute for Regional Foreign Policies.The project to promote the Arab Peace Initiative is also being supported by local NGO AJEEC-NISPED (the Arab-Jewish Center for Equality, Empowerment and Cooperation – Negev Institute for Strategies of Peace and Development) and German NGO, the Friedrich Ebert Foundation.The plan, which Saudi Arabia put forward at an Arab League summit in Beirut in 2002, offered full recognition of Israel, but only if it gave up all land seized in the 1967 war and agreed to a “just solution” for Palestinian refugees.The initiative bases its call for a solution to the refugee issue on UN General Assembly Resolution 194, which says that refugees should be able to choose whether to return to Israel or receive compensation.Asked why at this time, when Middle East uprisings have led to the disintegration of some states and regional chaos, Goren responded that the plan is even more relevant now as talks of regional cooperation against extremism and reports of contacts between Israel and Arab states are becoming more frequent.He argues that the Arab League has shown flexibility in past years on issues related to land swaps between Israel and the Palestinians, and on the need for an agreed upon solution to the refugee issue.Interestingly, he says, the idea of Israel giving up the Golan Heights to Syria is irrelevant because of the civil war. He sees most Arab states refraining from demanding Israel return the area to Syria under the present circumstances, but this demand remains in the initiative’s text.“The Arab Peace Initiative is a historic opportunity, but it did not yet make the desired impact on the Israeli-Palestinian peace process,” he continued, adding that his institute, along with their partners, are soon to launch a publicity campaign raising awareness of the plan to the Israeli public.“If there is progress on the Palestinian issue, the Arab world would come along,” Goren claimed.Questioned if the plan is relevant because of the reluctance of Palestinian leadership and the already ongoing – mostly secret – security ties with Arab states, he replied that this “cooperation can only go so far without moving on the Palestinian track.”The Mitvim chairman agrees with most Israelis that current prospects for renewed peace talks between Israeli and Palestinian leaders are slim, but he thinks promoting the Arab Initiative would “bring more clarity to the debate.“What would the region look like if Israel engaged more,” he added. “Israel should move forward on the Palestinian track in order to enable the Arab countries to increase the scope and visibility of their cooperation with Israel, and to maximize security and economic cooperation.”AJEEC-NISPED’s Middle East Programs director Anat Langer-Gal manages the Arab Peace Initiative Regional Network in Israel, which is a network including civil society players in the Middle East, such as Egyptians, Jordanians, Saudis and Palestinians.One of the goals is “to make sure the plan continues to stay on the table in the Arab countries,” she said, adding that “our partners in the Arab world also work with their governments.”