Israel to UN: 'We’re not opposed to the return of terrorist bodies'

There are those with the Israeli security forces who fear that the mass funerals held for assailants, who the Palestinians revere as martyrs, fuels incitement against Israelis. 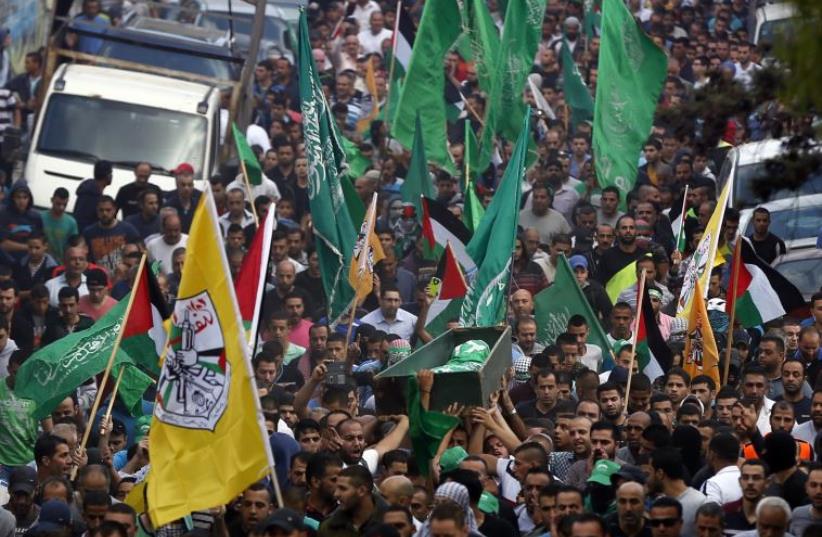 Funeral in the Shuafat refugee camp in east Jerusalem, on October 10, 2015
(photo credit: AHMAD GHARABLI / AFP)
Advertisement
Israel is not opposed to the return of bodies of Palestinian attackers to their families, Justice Ministry attorney Avinoam Segal Elad told the UN Committee Against Torture in Geneva on Wednesday.His statement was part of a two-day periodic hearing on Israel’s compliance with the Convention Against Torture that began on Tuesday.Among the dozens of issues raised by the 10-member committee in Geneva was Israel’s occasional practice of withholding bodies of Palestinians terrorists who were killed by security personnel during the wave of terrorism that began in September 2015.Some, particularly within the police, say that the mass funerals held for such assailants, whom the Palestinians revere as martyrs, fuel incitement against Israel, leading to more attacks.Defense Minister Moshe Ya’alon disagrees, and holds that the bodies should be handed over to the families.After a Palestinian detonated a bomb in Jerusalem on April 18 that wounded 21 people, Prime Minister Benjamin Netanyahu froze the return of terrorists’ bodies.However, on Sunday, following a number of security consultations, he decided to leave the decision with regard to the bodies in the hands of the Defense Ministry.On Tuesday, the state explained Netanyahu’s policy shift in a statement submitted to the High Court of Justice with regard to a petition submitted to the court by Adalah – The Legal Center for Arab Minority Rights in Israel.Adalah acted following the police’s refusal to return the body of Muataz Awisat – the 16-year-old resident of Jerusalem who was killed in October 2015 after trying to stab security personnel.The family wants a private autopsy performed to dispute the police charges, but cannot do so because police still holds his body. On Thursday the High Court ordered the police to return Awisat’s body to his family.Already on Wednesday afternoon, Elad told the UN Committee Against Torture in Geneva that “the Israeli government accepts that such bodies should be returned to their families.”However, Elad said, “security concerns may require the return to be postponed. Indeed, the return of some bodies of terrorists who have attacked Israelis during the current wave of violence have been postponed on that basis.“Nonetheless, in its response to a petition to the High Court of Justice yesterday on the matter, the state informed the court that after new evaluation of all the relevant circumstances, it is no longer opposed to the return of terrorists’ bodies for the purpose of burial, providing there will be an arrangement that guarantees that the burial will be conducted in a secure and nonviolent manner,” Elad said.He noted that on Tuesday, Ya’alon had allowed the body of Ahmed Reyad Shehada, 36, to be returned to his family in the Ramallah suburb of Beitunya, just hours after he drove his car into three soldiers standing by a check point near the West Bank settlements of Dolev and Talmon.Two of the soldiers were lightly wounded and the third was seriously hurt. Shehada was buried on Wednesday following a mass funeral.With regard to the home demolitions of terrorists, Elad said that it was done only for deterrence purposes.In early 2005, Israel suspended the use of this measure, stating, however, that it will be used in extreme circumstances.For the next seven years, only two such demolition occurred, one in 2008 and another in 2009.“The need to use a limited number of house demolitions in the context of the ongoing wave of violence stems from the unique challenges that are presented by it,” Elad said.“The current wave largely consists of attacks by lone-wolf terrorists who operate individually and unexpectedly, making it very difficult to prevent the attacks through intelligence gathering and other traditional measures. Deterrence, therefore, becomes an essential prevention tool,” he said.The High Court allows the use of this measure but only in special circumstances, Elad said.Homeowners may appeal the demolition orders to the court, Elad said.