Israel warns UN: Hezbollah has 120,000 missiles aimed at us 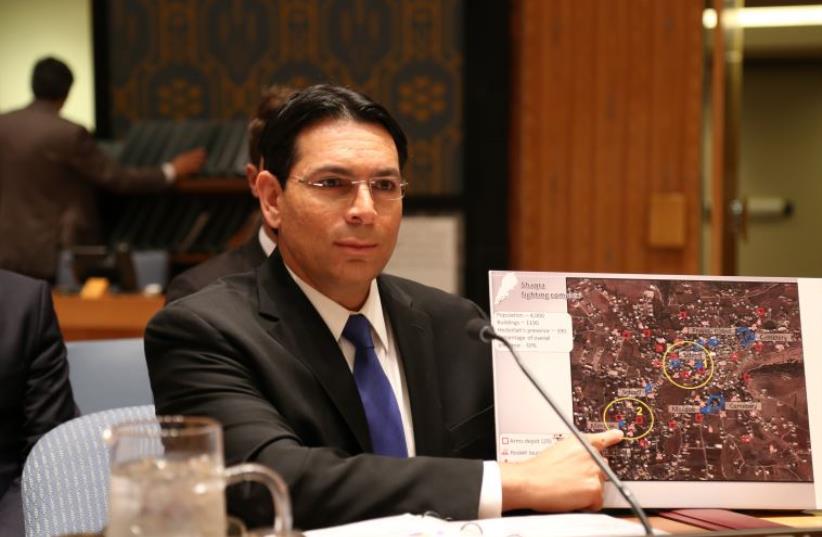 Ambassador Danny Danon addressing the Security Council
(photo credit: Courtesy)
Advertisement
NEW YORK – Hezbollah now possesses 17 times the number of missiles it did 10 years ago when UN Security Council Resolution 1701 was adopted at the end of the Second Lebanon War, Israeli Ambassador to the UN Danny Danon told the Council Tuesday.Hezbollah now has “more missiles below ground in Lebanon than the European NATO allies have above ground,” Danon said as he presented recent IDF intelligence about the terrorist organization to the Security Council, including aerial photographs revealing Hezbollah positions and statistics about the organization’s weapons stockpiles.Hezbollah now possesses about 120,000 missiles, compared to 7,000 10 years ago, Danon said. 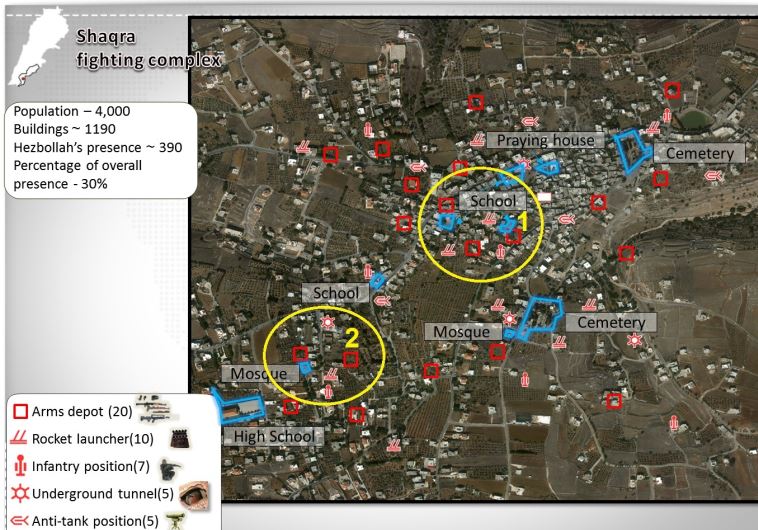 Aerial photograph presented by Danon to UNSC (Credit: IDF)
The Israeli mission to the UN told The Jerusalem Post the intelligence was classified and cleared by the IDF especially for use by Danon during the meeting.Tuesday’s meeting – which discussed the Israeli-Palestinian conflict and the conditions in Lebanon a decade after Resolution 1701 – called for “the disarmament of all armed groups in Lebanon, so that there will be no weapons or authority in Lebanon other than that of the Lebanese State.”As he presented the new intelligence to the Council’s members, Danon said: “When the war ended, this Council pledged that Hezbollah would no longer be allowed to threaten Israel and hold the people of Lebanon hostage.“I have the unfortunate task of informing this Council that 10 years later, the situation has gone from bad to worse. The government of Lebanon never stopped Hezbollah, and Hezbollah never stopped its military buildup,” he said.Danon’s aerial photograph, which was distributed to the Council members, showed the village of Shaqra in southern Lebanon, where a Hezbollah rocket launcher, an infantry position and ammunition depots hidden between homes and close to schools and a mosque could be seen.“This is exactly what we mean when we say that Hezbollah is committing a double war crime,” Danon told the forum.“Not only are they attacking Israeli civilians, but they are using Lebanese civilians as human shields to defend their terror activity.”“Let me be clear. Should Iran’s proxy, Hezbollah, make the miscalculation that it did in 2006, Israel will be ready to defend its citizens in the most vigorous and forceful way possible,” he stated. “We demand the removal of Hezbollah terrorists from southern Lebanon.”UN Secretary General Ban Ki-Moon, who concluded his 11th visit to the region last month, joined the Security Council meeting and urged Israelis and Palestinians to “immediately begin discussions with the Quartet” and implement the recommendations in the group’s recent report, which highlighted threats to a twostate solution including violence, terrorism and incitement, as well as Israel’s policy of settlement expansion.He also pointed a finger at Israel for the closure of Hebron following the attack on a Jewish family in the area earlier this month, which he described as “collective punishment,” and denounced Israel’s plans to advance building in the West Bank and east Jerusalem as a “flagrant disregard of international law.”Following Tuesday’s meeting, Palestinian Ambassador to the UN Riyad Mansour accused Danon of focusing on the Lebanese threat to “divert attention from the main aspect of the conflict, which is the denial of the national rights of the Palestinian people and the perpetuation and continuation of the occupation.”“He doesn’t want to face this global consensus that says that these are the core issues and Israel has to abide by them,” Mansour said.