“It may be too much to ask Arabs and Jews to be friends, but at least we should stop the hate.” 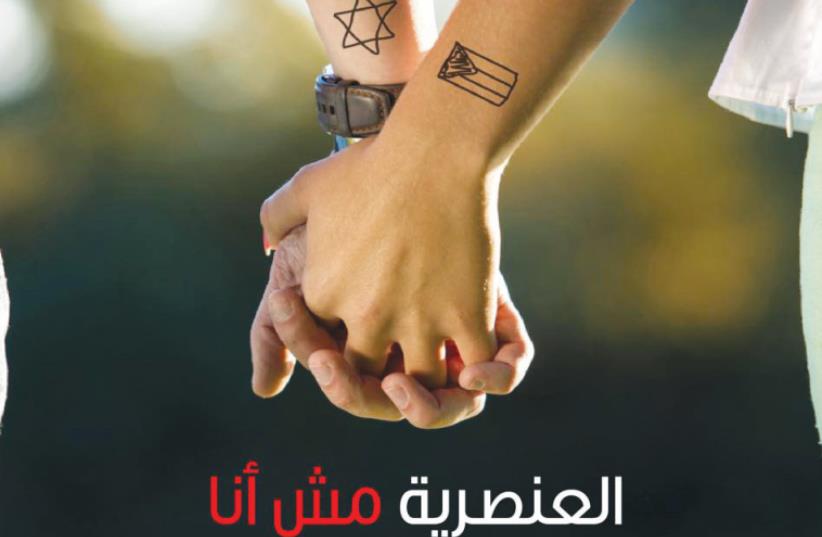 ‘RACISM IS not me,’ this image from the Bokra Facebook page promoting coexistence proclaims in Hebrew and Arabic.
(photo credit: BOKRA.NET)
Advertisement
The Israeli Arab website Bokra launched a campaign this week calling for a calming of the tension and coexistence between Arabs and Jews, but it has been criticized by some for abandoning the Palestinian cause.“We are going to live together, there is nothing we can do,” Ghada Zoabi, the founder and CEO of the Israeli Arab news portal Bokra.net, told The Jerusalem Post on Thursday.“A large part of the Arab public wants to return to the status quo ante,” said Zoabi, who said that Bokra is fully financing the campaign.Zoabi said that she decided to launch the campaign on social media, billboards, and a video in Hebrew and Arabic in order to calm the violent situation in the country.Many important Arab community figures have backed the campaign, she noted, including some heads of municipalities, religious leaders, NGOs, and soccer players.The media have a responsibility not to incite and to present things accurately, she said.Asked if any businesses are backing the campaign, she responded that many business people prefer not to get involved, because it is a sensitive situation.Regarding criticism on social media against the effort, she said that those that are against calming the situation “don’t believe in coexistence.”“It may be too much to ask Arabs and Jews to be friends, but at least we should stop the hate.”Bokra produced a two minute video promoting peaceful coexistence with a Jewish rabbi, Christian priest, Muslim imam and Druse Sheikh.Acre Chief Rabbi Yosef Yashar says in the video, “I believe with full faith that Jews and Arabs are able to live together in real coexistence, side by side.”Muslim imam and chairman of the Council of Muslim Leaders, Muhammad Kiwan, said, “I am sorry for each drop of blood that is spilled on this holy land.”Greek Orthodox priest Saleh Khoury of Sakhnin, stated, “Blood is pure and it is forbidden to kill.”Druse Sheikh Ali Muadi said, “We all hope that all of the good people will stand together and shout ‘enough’!” “Arab society feels frustrated,” Zoabi explained, adding that some Arabs have quit their jobs fearing going back to Jewish areas under the current circumstances.“Many religious Muslim women who wear a head covering fear going back to university because of racism.”