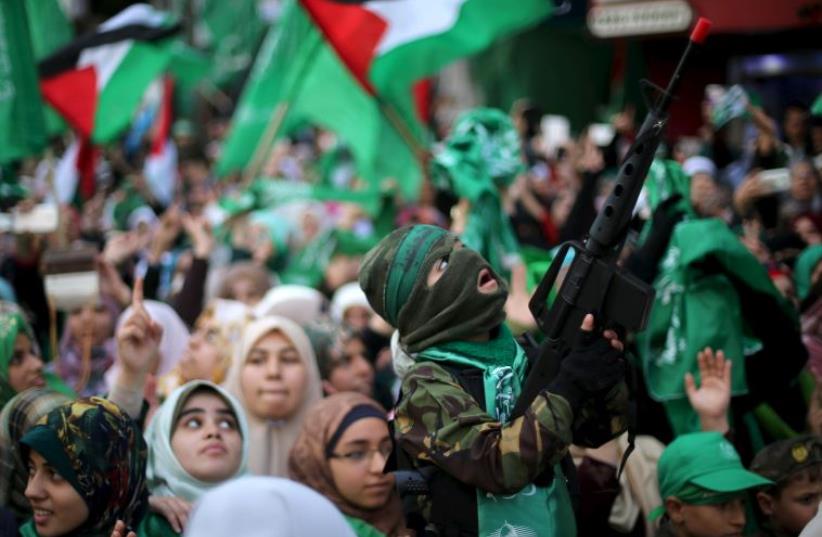 A masked Palestinian boy holds a toy gun as he takes part in a rally marking the 28th anniversary of Hamas' founding
(photo credit: REUTERS)
Advertisement
An Israeli-Arab dentist from the Galilee was sentenced to 20 months in prison on Thursday for funneling money from Israel to Hamas.The defendant, 32-year-old Malak Khatib of Kfar Kana, was convicted of forbidden activity involving using his property for terrorism purposes, multiple transports of Palestinians in Israel illegally.Probation officers at the Nazareth District court on Thursday said they believe Khatib was only interested in the money he made for making the transfers and that he didn’t commit the crimes for ideological reasons or due to any attachment to a terror organization. They also said he expressed his remorse and is a normative citizen with no criminal record, and that during the two months he was in prison awaiting trial he was an outcast of sorts that didn’t fall in with security prisoners from Hamas or any other faction.Khatib, a father of two whose wife is pregnant with their third child, was arrested by the Shin and the Police’s Northern District in April and initially charged with contact with a foreign agent, forbidden activity involving using his property for terrorism purposes, multiple transports of Palestinians in Israel illegally, and tax fraud offenses.The indictment details how Khatib on at least five occasions between 2014-2015 Khatib made illegal transfers of money from Palestinian laborers in Israel to Gaza under the instruction of a Hamas Gaza financing operative named Abu Farouk.Khatib was paid NIS 1,000 for each transfer, the indictment said, and also on a number of occasions transported illegal Palestinian laborers to spots across Israel for NIS 250 per worker.Around a month before his arrest, Khatib was stopped and questioned by security services and was given a warning and vowed to cease making the transfers. He also told the officers questioning him that he didn’t understand the gravity of his crimes, and apologized, the indictment states.At the time of his arrest, the Shin Bet said that the case “uncovers the unending efforts by Hamas to transfer large sums of money that are designed to promote the organization’s activities in Judea and Samaria.”The state had initially requested that Khatib be kept in custody until the end of his trial, but two months later he was released to house arrest.