The leaders went on to blame the "occupation" for the bloodshed. 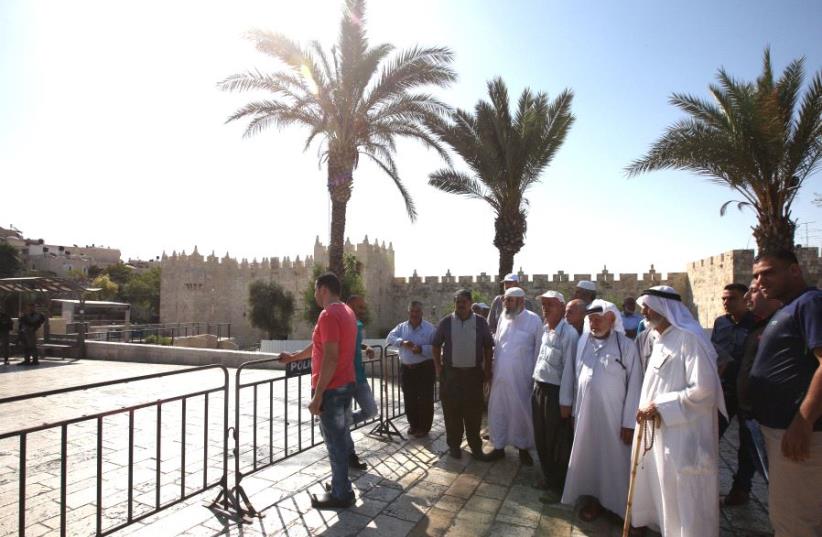 Crowd gathered on Temple Mount after closure following terror attack, 14 July 2017
(photo credit: MARC ISRAEL SELLEM/THE JERUSALEM POST)
Advertisement
The senior leadership body of Israel's 1.5 million Arab citizens has criticized Friday's attack at the Temple Mount/al-Aksa mosque complex by three Israeli-Arab gunmen that left two policemen dead. But it also condemned the subsequent closure of the mosque to prayers as  a "dangerous precedent."In a statement released late Friday after an emergency meeting, the High Follow-Up Committee for Arab Citizens of Israel termed the attack a "rejected individual act that doesn't serve the struggle of the Arab masses to defend their presence, rights and holy sites." But it later went on to say that the "occupation" bears responsibility for any bloodshed at the mosque."Our masses have struggled for 69 years through a track of popular struggle that has proven its credibility over years," the statement continued. "Any deviation from this doesn't serve the future of the struggle."The statement warned against "the government of Benjamin Netanyahu exploiting the operation to escalate its vicious incitement against our Arab masses and speed up a series of hostile plans" including home demolitions, budgetary discrimination, and the passing of "despotic laws" such as the Nation-State bill that emphasizes the state's Jewish character and would likely strip Arabic of its status as an official language.The statement termed Jerusalem and al-Aksa mosque "an occupied area where there is no legitimacy to the presence of the army. It is a sacred site. The occupation bears responsibility for every drop of blood that is shed [there]."It warned against "exploitation of the operation to impose a harsher reality than that which al-Aksa has faced in the decades of occupation and this could be beginning with the prevention of Friday prayers [after the attack] in a dangerous precedent."The three gunmen, who were shot dead by security forces, came from the northern town of Umm al-Fahm.The slain officers were named as Hail Stawi, 30, from Maghar and Kamil Shanan, 22, from Hurfeish, both Druse towns in northern Israel. Shanan was the son former Israeli Druse Knesset member Shakib Shanan.Jpost staff contributed to this report.