This is the third attack against Israeli citizens in the last 24 hours. 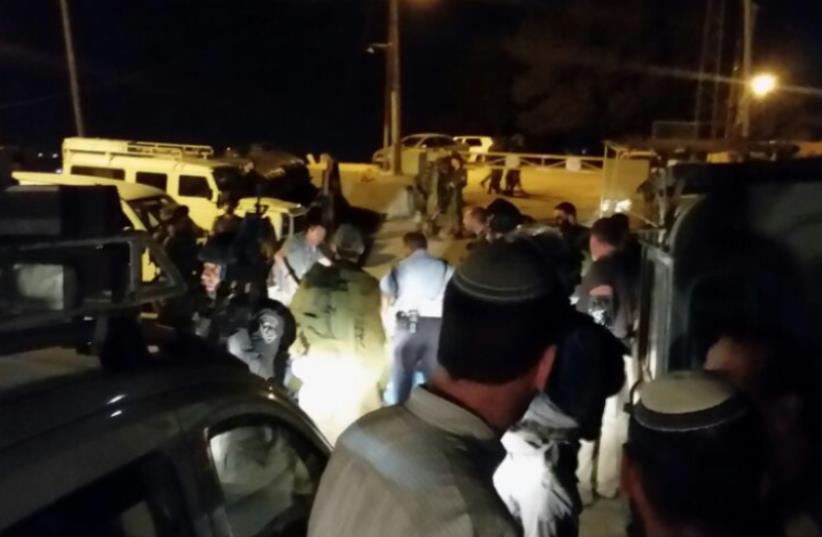 Scene of stabbing attack in Hebron, December 4, 2015.
(photo credit: UNITED HATZALAH‏)
Advertisement
Two Palestinians attacked an IDF soldier at the Jilber position in Tel Romeida near Hebron early Friday morning.  The attackers were shot and killed on the scene, while the IDF soldier sustained light injuries.
Magen David Adom medical services arrived on the scene and transported the soldier to Sha'are Zedek Hospital for treatment. This is the third attack in the last 24 hours against Israeli citizens. Earlier on Thursday, a Palestinian stabbed a police officer outside of Jerusalem’s Old City’s Damascus Gate . The attacker was shot dead, while the unidentified officer has been rushed to an area hospital with moderate-to-serious wounds.Although details of the attack remain unclear, according to an initial police investigation, the officer was stabbed in the arm by the assailant while checking his identification on Hanevi’im Street, at approximately 5:30 p.m.The 35-year-old officer was then reportedly struck in the leg by a bullet when responding officers returned fire, killing the assailant. The officer was treated at the scene by Magen David Adom paramedics, before being transferred to Sha’are Zedek Medical Center in Jerusalem. Also on Thursday, an IDF soldier and an Israeli civilian were wounded in a terrorist shooting attack at the Hizma checkpoint outside the Jerusalem neighborhood of Pisgat Ze'ev.The IDF Spokespersons Unit reported that the gunman exited his car on the approach to the checkpoint, and opened fire on the soldiers.IDF troops returned fire, striking and killing the terrorist.The soldier was reported to be in light condition, while the civilian was seriously wounded in the upper body.Daniel K. Eisenbud contributed to this story.