The lack of power has crippled the treatment of sewage in Gaza, such that some 90,000 cu.m. of sewage flow daily into the Mediterranean Sea and other waterways. 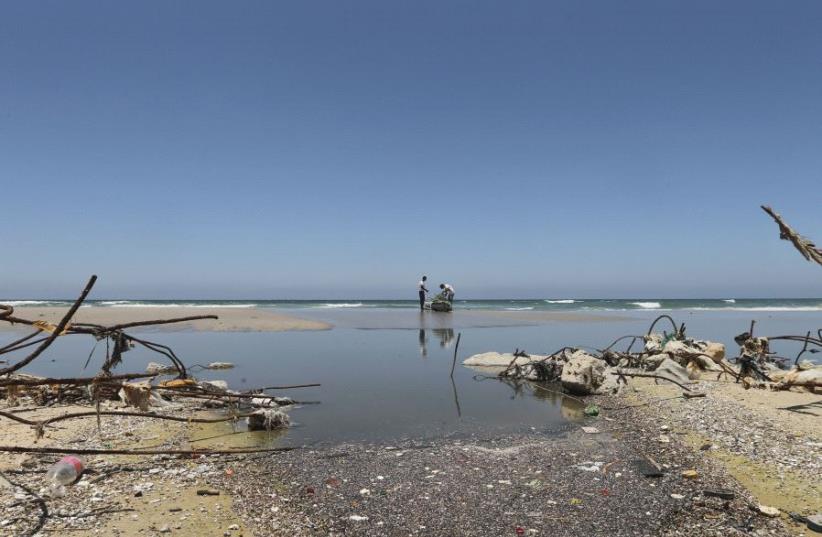 Palestinian fishermen are reflected in wastewater as they prepare their boat on a beach in the central Gaza Strip June 26, 2014.
(photo credit: REUTERS/MOHAMMED SALEM)
Advertisement
Southern Gaza border mayors have asked the United States to form an international coalition to help resolve Gaza’s water and electricity crisis, which has created a major pollution crisis for Israel.“There should be an international coalition that would help fund electricity for Gaza,” Sha’ar Hanegev Regional Council head Alon Schuster told US special representative for international negotiations Jason Greenblatt on Wednesday while he visited Israel’s Gaza border.Schuster handed him a letter from the mayor of Sderot and the heads of four regional council bordering Gaza warning that the situation in which untreated sewage flows daily into the Mediterranean sea and down the rivers into Israel, cannot continue.“There are serious health and environmental consequences that are expected to affect our area and significantly endanger our residents and the residents of the entire region of southern Israel,” the letter stated.It explained that “an absurd situation” had been created in which Israel was now investing in infrastructure to halt the impact of the untreated sewage, when the situation could more easily be solved by simply funding Gaza’s electricity.In June, Israel headed a request by the Palestinian Authority to reduce by 40% the amount of electricity it sends Gaza. The PA told Israel it only intends to pay NIS 25 million of its NIS 40m. monthly bill.The Palestinian Authority took the measure as part of its push to regain control of the Gaza Strip from Hamas which has ruled it for the past decade after ousting Fatah in a bloody coup.It followed an onerous tax it placed on diesel fuel for the Gaza power plant, which as a result has operated only intermittently since April.The lack of power has crippled the treatment of sewage in Gaza, such that some 90,000 cu.m. of sewage flow daily into the Mediterranean Sea and other waterways.“In the absence of treatment within the Strip, the sewage flows into the territory of the State of Israel – the water reservoirs in the area of the Hof Ashkelon Regional Council, the southern shores of Israel, the drainage basins and the rivers of the entire region,” the letter stated.“We, the heads of the local councils around the Gaza border area, wish to express our firm reservation about the situation we are facing against our will,” the letter stated.“As a result of this situation, the desalination plant in Ashkelon has been impacted, which is responsible for the supply of one-fifth of the drinking water of the citizens of the State of Israel,” the letter warned.“This issue could be as serious as the security threats we have faced in the past 15 years. We are on the verge of a health crisis that does not take into account political borders,” the letter warned.