Zionist Union backbenchers, MKs Ksenia Stevlova and Yossi Yona made the weekend visit at the invitation of the PA president. 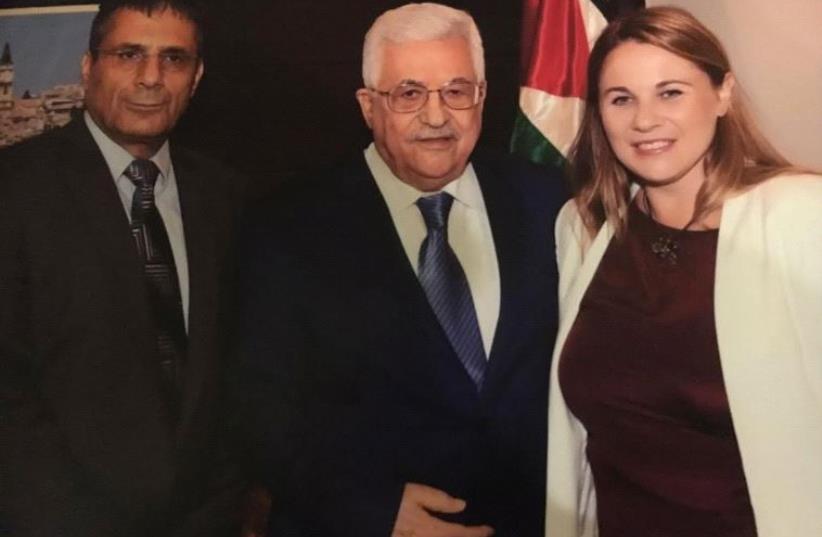 Zionist Union MKs Ksenia Stevlova and Yossi Yona meet with Palestinian Authority President Mahmoud Abbas in Ramallah
(photo credit: Courtesy)
Advertisement
Two Zionist Union MKs met with Palestinian Authority President Mahmoud Abbas over the weekend, saying he is committed to making peace.MKs Ksenia Svetlova and Yossi Yonah, both of Zionist Union, visited Abbas in Ramallah at his invitation.“It was important for us, those who want to solve the conflict, to not turn into those who ‘never miss an opportunity to miss an opportunity,’” Svetlova said, paraphrasing an Abba Eban quote about Arab states. “We were happy to hear that Abbas continues to oppose violence and is committed to a solution.”The lawmakers discussed Russian President Vladimir Putin’s recent statement that he wishes to host Israeli-Palestinian peace talks in Moscow, and they called on Prime Minister Benjamin Netanyahu to agree.Netanyahu must “do everything possible and beyond to change the reality in which we pay such high prices,” Svetlova added.Yonah said the “political chaos in the Middle East creates possibilities for new alliances between us and moderate states in the region.“Significant advances in the efforts to reach an agreement between us and the Palestinians are an inseparable part of these alliances,” he said. “In the meeting with us, Abbas said he is willing to take part in any regional or international initiative toward a just comprehensive solution to the conflict.”Only a peace agreement based on two states can ensure Israel’s character as Jewish and democratic, Yonah said.