Israeli politicians to EU: Shame on you for opposing Golan sovereignty

“The Golan heights and Jerusalem and the Land of Israel has been the home of the Jewish people thousands of years," Education Minister Naftali Bennett said. 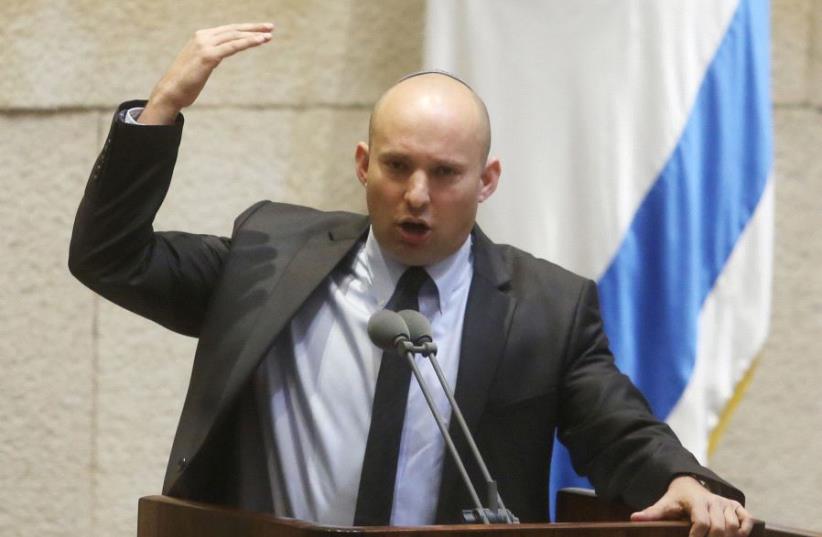 Naftali Bennett
(photo credit: MARC ISRAEL SELLEM)
Advertisement
Israeli right-wing politicians lashed back at the European Union for its “shameful” rejection of Israeli sovereignty on the Golan Heights, calling its 28 nations “peace refuseniks.”“Minutes ago the EU announced that it would not recognize the Golan Heights as part of the state of Israel,” New Right Party head and Education Minister Naftali Bennett said in a video message he posted on Twitter.“We could add to that the fact that the EU does not recognize Jerusalem as our capital,” he wrote, adding “Shame on you.” “The Golan heights and Jerusalem and the Land of Israel has been the  home of the Jewish people thousands of years before France was the home of the French and the United Kingdom  the home of the British,” Bennett said.“So we will continue building our amazing country. We will continue defending the free world from radical Islam, even though you do not deserve it,” Bennett said.Kulanu Party head and Finance Minister Moshe Kahlon said, “We will not allow those who keep the Iranian terror regime’s economy afloat to preach morality to us. Israel will not be held hostage by peace refuseniks and the policies of the Axis of Evil,” Kahlon said.“The whole world knows that the Golan Heights is an inseparable part of the Land of Israel and the State of Israel,” Kahlon added.Meretz Party head MK Tamar Zandberg said, “Trump's election gift to Bibi has begun to cost us dearly. Now the EU is clarifying its position on the Golan Heights. Why did these demons have to be awaken on a subject that was not even on the table?”“Instead of making needless statements on the Golan Trump should publish his peace plan so that each party can relate to it,” she said.But when it comes to “peace” and “Bibi,” she said, “there isn’t even anything to mention.”