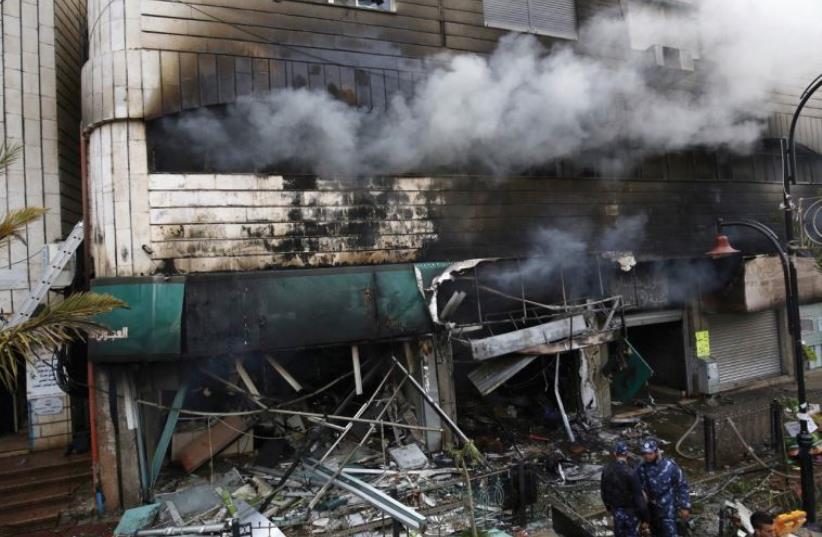 PA POLICEMEN stand in front of shops in El-Bireh, adjacent to Ramallah, after a fire that IDF troop accidentally started yesterday.
(photo credit: REUTERS)
Advertisement
A combined IDF, police and Border Police raid Thursday on alleged terrorist-financing sources in Ramallah ignited a fire that damaged several shops and offices.The fire started after troops tried to blow open safes in a money-changing office suspected of handling funds for terrorists.One of the people present in the targeted office – the Al-Ajouli Money-Changer Company – refused to open a safe, forcing soldiers to blow it open with a controlled explosion, the IDF Spokesman said.Nobody was injured in the fire, which caused extensive damage to the building, located on Al-Quds Street, only a few hundred meters away from Manarah Square in the center of Ramallah.“We will investigate this incident and draw lessons from it,” the IDF said.Palestinians said the raid was the third of its kind against a money-changing firm in Ramallah. The IDF arrested the owner of the company, Ghazi al-Ajouli, according to Palestinian Authority security sources.They said that Ajouli was arrested at his home before he was taken to the company offices.PA Civil Defense officials claimed that IDF soldiers prevented fire engines from reaching the targeted building for nearly 40 minutes.PA Minister of Economy Abir Odeh denounced the raid as an “unforgivable crime,” saying it was in violation of all international laws and conventions.