Lebanese President Michel Aoun in a statement on Saturday declared that, "any attempt to hurt Lebanese sovereignty or expose the Lebanese to danger will find the appropriate response." 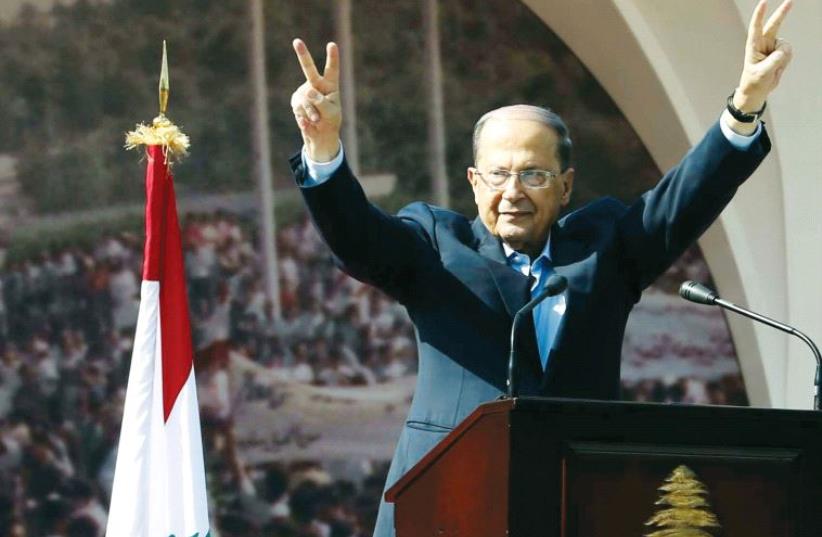 Michel Aoun
(photo credit: REUTERS)
Advertisement
BEIRUT - Lebanese President Michel Aoun said on Saturday that any Israeli attempt to violate Lebanon's sovereignty would be met with the "appropriate response", in a statement released by his office."Any attempt to hurt Lebanese sovereignty or expose the Lebanese to danger will find the appropriate response," the statement said, without elaborating. It said Aoun was reacting to recent remarks in a letter at the United Nations by Israel's U.N. ambassador, which amounted to a "masked attempt to threaten security and stability" in southern Lebanon, but did not say what the remarks were.Israeli Intelligence Minister Yisrael Katz said on Thursday that all of Lebanon would be a target if Hezbollah fired on Israel.This past Thursday, Hezbollah leader Hassan Nasrallah called on Israel to dismantle its nuclear reactor in Dimona, warning that it poses a threat to Israel's existence should it be hit by one of Hezbollah's missiles.Nasrallah made a similar threat against Haifa's ammonia tank last year, saying that a missile hitting the facility could have the affect of a nuclear bomb. Shortly after, a Haifa court ordered the tank closed, citing the security threat.Speaking in a televised speech commemorating Hezbollah's slain leaders, Nasrallah said that Hezbollah sees Israel's emptying of the ammonia tank as a sign that it fears the Lebanese Sh'ite group."I call on Israel not only to empty the ammonia tank in Haifa, but also to dismantle the nuclear reactor in Dimona. Our military capabilities will strike Israel and its settlements," he warned.Aoun was elected in October and is known as being "pro-Hezbollah." Shortly after the winning the election Aoun stated his plans to "release what is left of our lands from the Israeli occupation," in reference to the disputed border between Israel and Lebanon. In 2006 Israel fought a month-long war against Hezbollah in south Lebanon.Since then, hostilities between them have been limited to occasional firing across the border and air strikes by Israel against Hezbollah leaders and military equipment in Syria, where the group is fighting in support of President Bashar al-Assad.Trump's administration has been vocal in its criticism of Hezbollah's patron Iran and in its support for Israel.