The school’s mission is to make “education a force for peace and sustainability in the Middle East.” 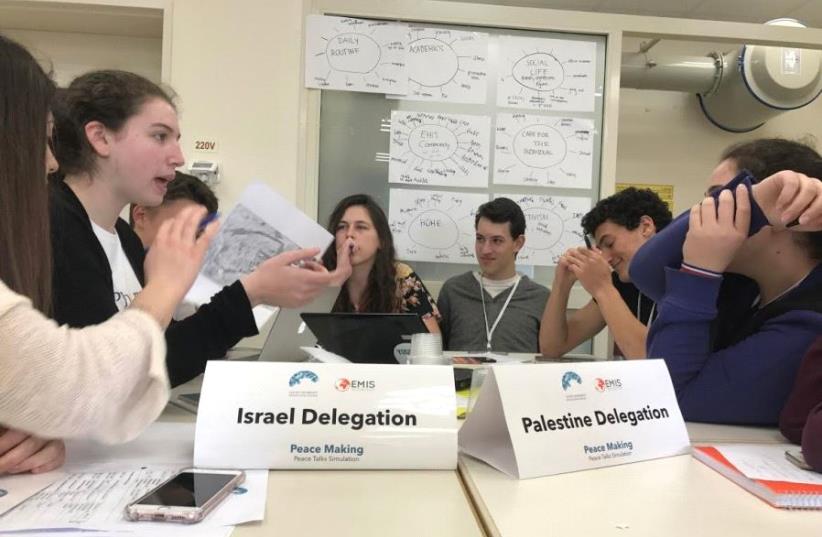 Students broke up into Israeli and Palestinian delegations and negotiated peace deals at the Charney Resolution Center in Kfar Hayarok
(photo credit: ELIYAHU KAMISHER)
Advertisement
Israeli and Palestinian officials haven’t held direct peace talks since 2014, but last week in Kfar Hayarok, just north of Tel Aviv, Israelis, Palestinians and internationals not only sat for face-to-face peace talks but giggled over dinner. Next weekend they will participate in a biweekly dance party.This was the scene at the Eastern Mediterranean International School a boarding school that resembles a small utopia of diversity; 20% of the 150 students are Jewish and Arab-Israelis; 20% Palestinians, Arabs and Muslims from the Middle East (including one student from Yemen); and 60% internationals from 40 countries. The school’s mission is to make “education a force for peace and sustainability in the Middle East.”“They have to cooperate because they are going to sleep and eat in the same room,” remarked Gili Roman, principal of the $35,000-a-year EMIS, for which the majority of students receive full or partial scholarships.On Thursday, 50 students culminated a 24-hour simulation of Israeli- Palestinian peace talks hosted by the Charney Resolution Center on the EMIS campus. The students broke into Israeli and Palestinian delegations and sought resolutions to some of the conflict’s most intractable issues.“We are forcing on Jerusalem, borders and settlements,” said Olivia, 17, from Albania who took a break from her negotiations team to speak with The Jerusalem Post.There were some misunderstandings in the negotiations process, she said, indicating that the Israeli delegation’s request for military control over the Jordan border was misunderstood by the Palestinian delegation.Nevertheless, all three negotiating teams arrived at the same conclusion – a two-state solution – although the parameters differed.Amna Jebali, 17, from central Israeli city of Taiba, said she felt herself sympathizing with both the Israeli and Palestinian concerns during the negotiations. “I feel as if I am in the middle,” she stated. “People ask me were I am from and I tell them ‘it’s complicated.’” Marwa Toame, 17, from Ramallah, said the hardest part of the negotiations was reaching an agreement on Jerusalem’s holy sites.Toame has spent many nights arguing with her Israeli roommate over the Israeli-Palestinian conflict.“Before, I never thought about discussing these things with an Israeli,” she remarked, adding that some of her friends did not approve of her decision to study in Israel. “I thought maybe going there can help bring the change we need,” said Toame, “Maybe one of us can be the next ambassador.”While the bucolic lifestyle of Kfar Hayarok enables Israeli-Palestinian friendships to blossom, students are not completely sheltered from conflict.One Palestinian student, is on a three-month visa that must be renewed every month. When her visa renewal was delayed for nearly two weeks, she was not allowed to leave the campus for fear of being caught without proper paperwork.Also, the Israeli students will soon be drafted into the IDF, a fact that looms over their friendships.“It’s hard to think that your friend is going to be in the army fighting against you,” said Toame. “But, if we have a two-state solution maybe I will be in the Palestinian army as equals.”Gali, from Pardess Hanna also has confronted the issue with her Palestinian friends.“We were watching a movie about [IDF] checkpoints and I told them: ‘Don’t you know in two years we will be there manning the checkpoints?’”