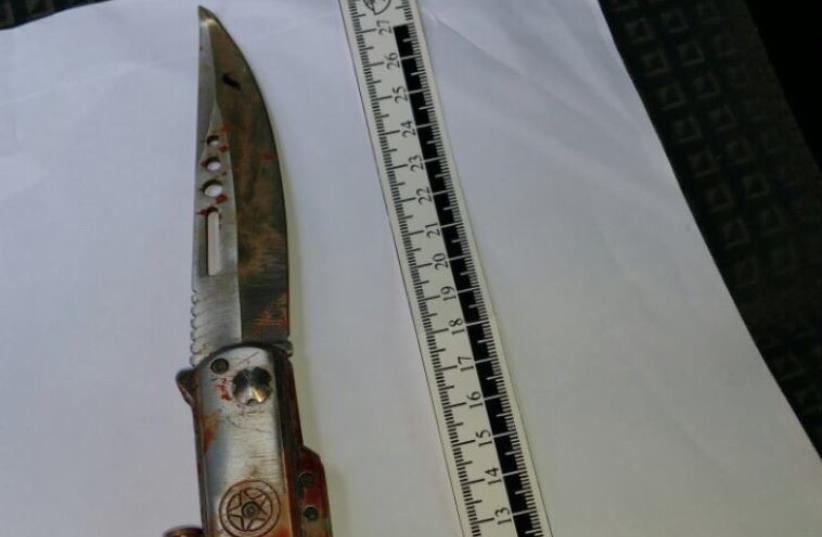 The knife used in a stabbing attack near Damascus Gate.
(photo credit: ISRAEL POLICE)
Advertisement
The Jerusalem District Attorney’s Office issued an indictment against a 16-year-old female Arab defendant on Wednesday for attempted murder and possession of a knife, stemming from a thwarted terrorist attack outside the Old City’s Damascus Gate earlier this month.According to the indictment, on the morning of February 9, the suspect procured a kitchen knife from her Beit Safafa home in southern Jerusalem, hid it in a bag, and traveled to Damascus Gate “in order to carry out a murderous attack against members of security forces.”At approximately 9:15 a.m., the defendant, whose name is under a gag order since she is a minor, drew the suspicion of Border Police officers stationed in the area, who asked her for identification.When the officers attempted to search her bag, she “grabbed the knife and suddenly attacked one of the officers with the knife raised in her hand, attempting to stab him in the upper body in order to cause death,” the indictment stated.Acting quickly, the officer deflected her hand, causing the knife to fall to the ground.He wasn’t wounded during the attack, and the teenager was immediately arrested.Wednesday’s indictment for attempted murder follows a slew of similar indictments issued in the last few weeks to young defendants accused of attempting to stab Jews and security personnel in the Damascus Gate area.