Officers questioned the man, who was hiding a knife in his right hand which was hidden behind a fence. 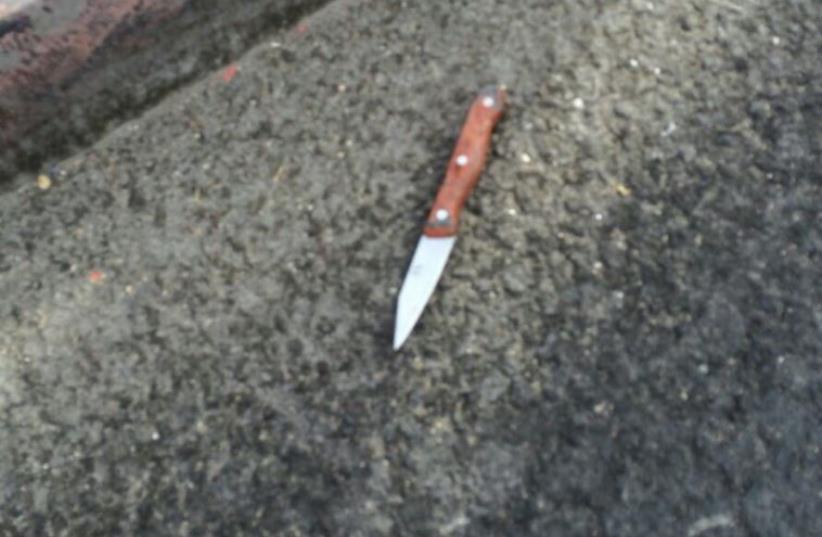 Knife that a 21-year-old man from Jebl Mukaber in Jerusalem was hiding in his sleeve
(photo credit: BORDER POLICE)
Advertisement
Police thwarted a terror attack in Jerusalem's Nof Zion neighborhood after receiving reports of a suspicious man eyeing Jewish houses in the area, Police reported Friday.Border Police Officers arrived to the scene and started questioning the man, a 21-year-old resident of the city's Jebl Mukaber neighborhood and noticed that his right hand was hidden behind a fence.They maintained their distance as the suspect showed the officers his right arm. His hand was in a fist, as if he was holding something. Police asked the suspect to open his hand in order to see if he was holding a weapon, but he refused and requested for the officers to allow him to return to his home neighborhood.Finally, one of the officers managed to  apprehend the suspect, grabbed his arm and found a knife hidden in the suspect's sleeve.The suspect was arrested and will undergo a police investigation. Only hours earlier, an IDF soldier was stabbed and lightly wounded by a Palestinian attacker during operational activity near the Gush Etzion security fence, on the road between Gush Etzion and Beit Shemesh.Soldiers opened fire on the knife attacker, striking and wounding him in the lower half of his body. The terrorist was lightly wounded and taken to Hadassah University Medical Center in Jerusalem's Ein Kerem. It was reported that the terrorist, a 16-year-old youth, is a resident of Surif in the Hebron region and was a neighbor of the two terrorists who carried out the Thursday attack in Beit Shemesh.

Yaakov Lappin contributed to this article