Right before the sentence was handed down Tytell said that he had no regrets and was proud of what he had done. 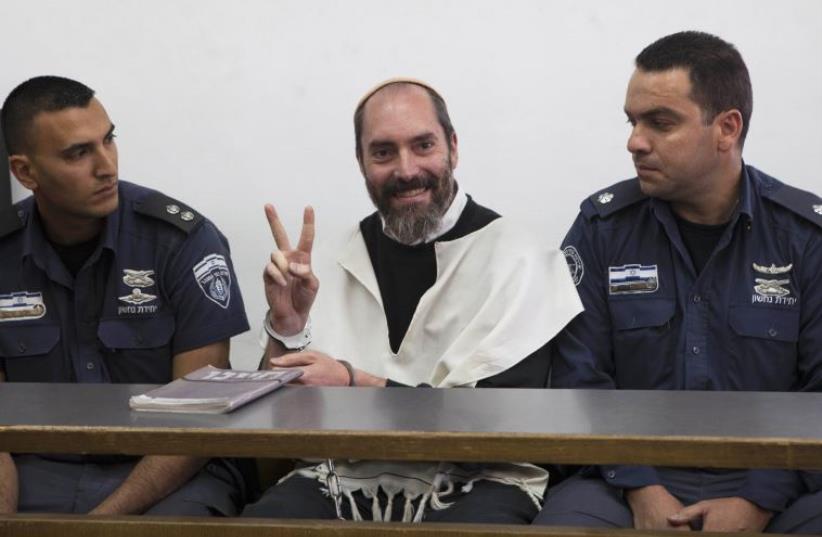 Yaakov Jack Teitel
(photo credit: REUTERS)
Advertisement
The Supreme Court upheld on Tuesday the two life sentences of terrorist and serial killer Yaakov “Jack” Teitel.Teitel was sentenced by the Jerusalem District Court in November 2015 to two life sentences and an additional 30 years in prison for the murder of two Palestinians, and an assortment of other hate crimes targeting homosexuals, left-wingers and Messianic Jews. Just before his sentence was handed down, Teitel said that he had no regrets and was proud of what he had done.Though the sentence was pronounced in November 2015, Teitel was only convicted in January of that year. In May 2015, the court accepted an unusual plea bargain made between the district attorney and Teitel’s attorney Asher Ohayon, whereby the defendant admitted he had murdered two Palestinians and committed other violent crimes from 1997-2008.The revised indictment included 10 of the original 14 charges, including two murders and two attempted murders. But it dropped charges relating to attempted attacks which the authorities had foiled.Although Teitel admitted to the charges in the amended indictment, he refused to plead guilty in court saying he did not recognize its authority. Courts normally require an accused to admit to an offense in-person as a safeguard to his rights in order to insure the defendant has not been coerced, or is confused about what he is admitting to.Notwithstanding that Teitel told the Jerusalem District Court that an “angel” controlled him, the court found the Florida-born man was not insane and was “responsible for his actions.”Supreme Court Judges Zvi Segal, Moshe Hacohen and Moshe Yair Drori noted that the lower court accepted that Teitel had committed the acts attributed to him in the amended indictment.Dubbed “the Jewish terrorist,” Teitel was originally indicted in 2009.While still living in the United States, he decided to murder Palestinians, and came to Israel as a tourist for that purpose, smuggling a gun into the country by hiding it in a VCR. After spending his first weeks in the country with friends in Jerusalem, Teitel acquired bullets for his smuggled gun, and sought out a suitable victim. In 1997, he murdered Palestinian taxi driver Samir Balbisi, who was found shot dead in his cab.Teitel chose to murder an Arab taxi driver because he thought he could ask the driver to first drive him to a suitable spot. On June 8, 1997, he went to the taxi stand at the Old City of Jerusalem’s Damascus Gate. There he hired Balbisi and told him to take him to a hotel.After driving for a while, however, Teitel told Balbisi to stop. He then shot the Palestinian in the head at point-blank range.In August 1997, Teitel murdered Beduin shepherd Issa Musa al-Mahamada near the West Bank settlement of Carmel, south of Hebron.Teitel then returned to the United States.In 2000, he made aliya and settled in Shvut Rachel near Jerusalem, where he married and had four children. That same year he was arrested by police on suspicion of carrying out the 1997 murders but was released due to lack of evidence.In March 2008, according to the indictment, Teitel attempted to murder Amiel Ortiz, a 15-year-old Messianic Jews from Ariel. Teitel sent a bomb in a Purim gift basket to Ortiz’s home, which exploded when the teenager opened it.Other charges include planting homemade explosives in September 2008 at the home of Prof. Ze’ev Sternhell, a left-wing scholar from the Hebrew University of Jerusalem.Teitel also attempted to murder a resident of the Beit Jamal monastery near Beit Shemesh because he believed the monks there were missionaries trying to convert Jewish children.Following his arrest in 2009, Teitel was remanded into custody in a psychiatric facility. Though an initial mental health assessment in 2010 deemed him unfit to stand trial, subsequent tests determined he was able to face prosecution.Teitel’s lawyers had previously argued that their client did not know right from wrong when he committed the acts, and therefore the court could not impose a prison term.At least one expert testified Teitel was insane. But the prosecution successfully argued that he was responsible for his actions when committing the crimes.The court said that it accepted another expert opinion that regardless of whether Teitel may have had episodes of insanity during his trial and imprisonment, if he had been insane years earlier when he committed the crimes, he would have deteriorated mentally far more by the time of his trial.Based on the lucid manner in which Teitel gave statements to police when arrested, the court agreed with the expert that any episodes of insanity came during imprisonment after his murder spree.