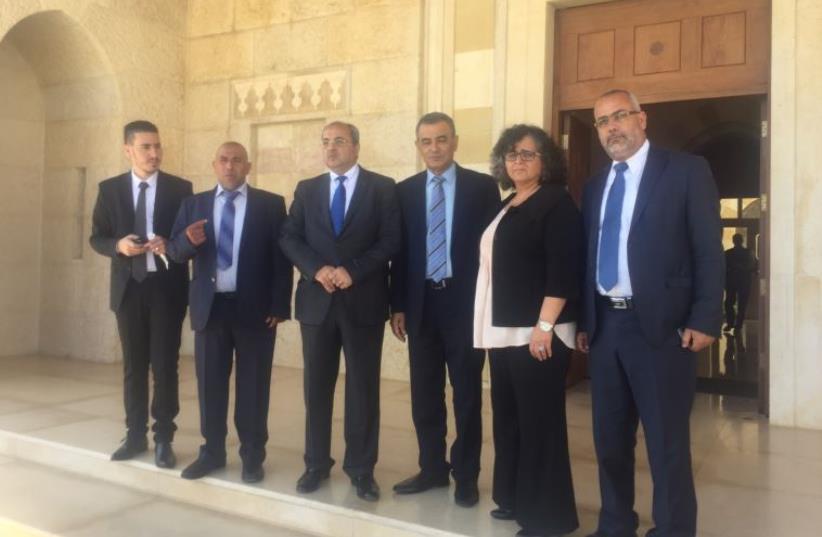 Joint List delegation in Jordan
(photo credit: JOINT ARAB LIST)
Advertisement
Jordan’s King Abdullah II told a delegation of five visiting Joint List MKs on Sunday that the Aksa Mosque was a place for Muslim prayer, with no division or partnership.The group, which met with Abdullah in Amman to discuss tensions over the Temple Mount, was to continue on to Turkey to meet with President Recep Tayyip Erdogan on Monday.The delegation is headed by Joint List MK and Ta’al chairman Ahmad Tibi. It includes Balad head Jamal Zahalka, Taleb Abu Arar (United Arab List), Aida Touma-Sliman (Hadash) and Osama Sa’adi (Ta’al).“King Abdullah’s words were sharp and determined, and they showed his anger about what is occurring at al-Aksa and in Jerusalem,” Tibi said, adding that the king told the delegation he would take measures if the situation continued.According to the MKs, Abdullah wondered why Prime Minister Benjamin Netanyahu would pursue actions that could cause an explosive situation. The king also indicated that he was following events on the Temple Mount closely and it would be an important subject in meetings with world leaders at the UN next week.Tensions have been focused on the Temple Mount compound in Jerusalem, the most sacred site in Judaism and where the temples once stood. It also houses the Aksa Mosque and the Dome of the Rock, which are sacred to Muslims.In the meeting with Abdullah, the king expressed appreciation for MKs’ efforts on the issue. The participants also discussed the matter of Israeli Arabs who want to travel on the pilgrimage to Mecca, Israeli Arab students studying in Jordan, and security prisoners.Yisrael Beytenu chairman Avigdor Liberman called the delegation’s travels another example of incitement and accused the Joint List of “being busy with anti-Israel activity day and night, and doing all they can to provoke and undermine the regional situation and harm the State of Israel” while being Israeli lawmakers.“I suggest that they add another station to their planned visit – they should go to Syria and stay there,” Liberman said.Knesset Law, Justice and Constitution Committee chairman Nissan Slomiansky (Bayit Yehudi) suggested that the Joint List MKs “continue their meetings abroad and meet with the leaders of Islamic State as well, and learn from them how to run a civilized state that protects freedom of worship and archeological finds in the Middle East.”The Joint List MKs also are planning meetings with EU leaders in order to protest what they say is a new policy regarding visits by Jews to the Temple Mount during the Jewish holidays. Tibi warned that the situation could “spark a fire” if the Israeli government did not retract new measures adopted in recent weeks.Last week, the Joint List MKs met with Palestinian Authority President Mahmoud Abbas about the same matter.Their trip to Turkey is being funded by the Turkish government. It was approved by the Knesset Ethics Committee, which must pre-authorize any externally funded travel. They drove in their own cars to Jordan.Reuters contributed to this report.