Abera was last seen in Israel on September 7, 2014, when soldiers saw him climb the fence into the Gaza Strip. 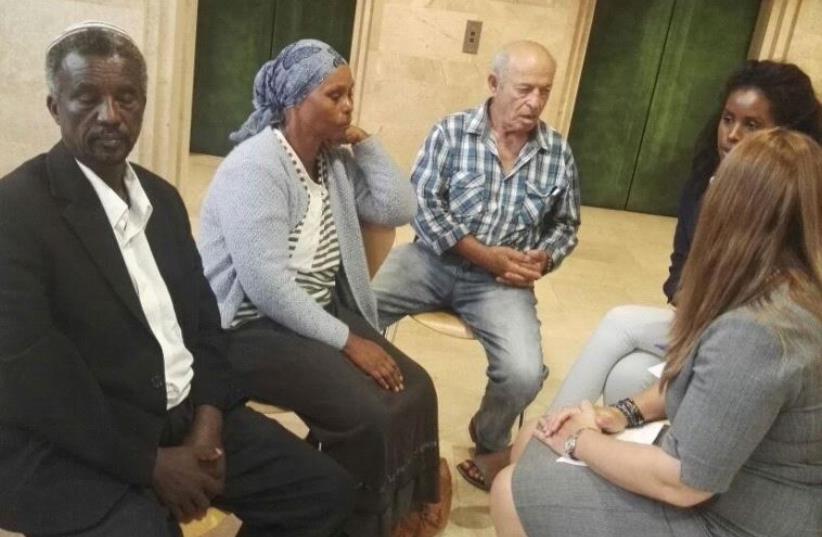 Parents of Abera Mengistu along with "Save Abera" campaign staff
(photo credit: SAVE ABERA CAMPAIGN)
Advertisement
As the Knesset opened its winter session, Avraham “Abera” Mengistu entered his 785th day in Hamas captivity and the family of Mengistu appealed to Knesset members to prioritize securing the return of their captured son.“The story of Abera Mengistu has been forgotten – we have not forgotten and we urge you not to abandon Abera who has been held by Hamas for the past 785 days,” the parents of Abera said in a letter personally handed out to every Knesset member on Monday.Abera was last seen in Israel on September 7, 2014, when soldiers saw him climb the fence into the Gaza Strip.The family also protested family visits for Palestinians in Israeli prisons. “It is inconceivable that the Israeli government allows family visits to Hamas prisoners jailed in Israel while Abera has not seen the light of day for more than two years,” Abera’s brother Illan said on Monday.Hisham Sayed, a mentally-ill man who wandered into Gaza in April 2015 also remains in Hamas captivity along with the remains of soldiers Hadar Goldin and Oron Shaul killed in action in the 2014 Operation Protective Edge.“We must not lose the value of human life. We must not forget Abera,” the parents’ letter to Knesset members concluded.