Report: Iran transfers new technology to Houthi rebels as US increases airstrikes against al-Qaida in Yemen. 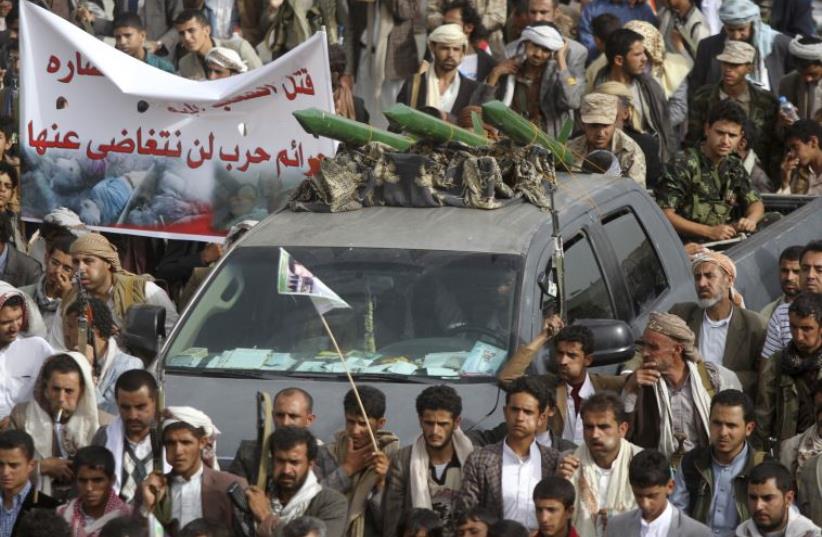 Mock missiles are mounted on a truck during an anti-Saudi demonstration by Houthi followers in Sanaa, Yemen, June 5, 2015
(photo credit: REUTERS)
Advertisement
Iran is increasing its support for Houthi forces in Yemen through the transfer of new technology and advanced weaponry. That is the conclusion of a new report by Conflict Armament Research, a UK-based organization that identifies and tracks conventional weapons.In their March 2017 report, “Iranian technology transfers to Yemen,” the findings indicate that drones are “used by Houthi forces to attack coalition missile-defense systems.”The transfer of Iranian technology to its allies and proxies in Yemen poses a direct threat to the Bab al-Mandeb straits for ships exiting the Red Sea and is part of a wider Iranian attempt to exert influence over the Middle East.
Rouhani says Iran ready to help bring democracy to Syria, Yemen
In March 2015, Houthi rebels in Yemen poured south from their stronghold in the mountains of western Yemen and threatened to take the port city of Aden. Saudi Arabia intervened with a 10-nation coalition to prevent the Houthis from seizing more territory.Adel al-Jubair, Saudi Ambassador to the US, said that “the operation is to defend and support the legitimate government of Yemen and prevent the radical Houthi movement from taking over the country.”The Houthis are Zaydis, a branch of Shia Islam, but their alliance with Iran is more complex than religious affinity.Thomas Juneau, an assistant professor at the University of Ottawa, pointed out in 2015 that the Houthis were allied with former Yemeni president Ali Abdullah Saleh.Iran sought to exploit the civil war in Yemen among Saleh, al-Qaida, the Houthis and the Saudi-backed current president of Yemen, Abdrabbuh Mansur Hadi. “It now appears that small numbers, perhaps dozens, of Islamic Revolutionary Guard Corps (IRGC) officers with assistance from Lebanese Hezbollah have set up a train-and-equip program for Houthis,” Juneau wrote. In March 2015, Al-Arabiya said an Iranian ship off-loaded 186 tons of weapons for the Houthis at the port of Salif.In October 2016, two missiles fired from Houthi-held territory north of the Bab al-Mandeb straits targeted the USS Mason, a destroyer. The US responded to the attack by striking three radar sites in Houthi areas, according to reports. In January the Houthis used a small suicide boat to strike a Saudi frigate off the southern coast of the Red Sea. The incident was similar to the USS Cole attack in 2000 in Aden port.The use of drones in the Yemen conflict represents a new escalation. The CAR report says it “documented seven UAVs, and one UAV engine in the possession of the UAE Presidential Guard forces.” Six of these were intercepted in November in Yemen’s Marib Governorate in central Yemen. “These aircraft allegedly entered the country overland from Oman.”The UAE, which is part of the Saudi-led coalition, also recovered a UAV that crashed near Aden International Airport.They retrieved its engine after a battle with Houthis in Marib.The Houthis have displayed UAVs they claim they manufactured locally.According to CAR, “one of the systems displayed, the Qasef-1 (Stryker-1) is identical to the UAVs documented by CAR in the UAE.” The CAR believes the Qasef-1 was not made locally.“It appears to be a type within the Ababil-II family of UAVs produced by Iran’s Aircraft Manufacturing Industrial Company (HESA).” It shares “near-identical design and construction characteristics with the Iranian UAV, but also features identical serial number and prefixes.”If a militia group made a UAV locally, why would it even put serial numbers on them? The serial numbers included seven digits and a “batch” number, representing a production line manufacture. The fact that the UAVs were intercepted along a known smuggling route “suggests that the Qasef-1 is imported, rather than designed or manufactured in Yemen.”So far the Houthis have used the UAVs as kamikaze weapons, crashing them into Patriot surface- to-air missile systems radar, according to the report. “The presence of Iranian-designed and manufactured UAVs in Yemen not only confirms Iran’s material support to Houthi and Salah-aligned forced, but also its role in enabling groups to conduct increasingly sophisticated asymmetric operations.”Jonathan Schanzer, senior vice-president for research at the Foundation for Defense of Democracies and a former terrorism finance-analyst for the US Treasury, says the report matches the trend of Iranian involvement. “The assistance we have been hearing about has ranged from the possible deployment of IRGC, the possible deployment of Shia militias recruited by Iran or contingent of Hezbollah fighters – and you could call them senior types who would help train the Houthis on some level.”This is of particular concern to countries throughout the region, including Israel. “[There is] direct allegations of Iranian weaponry coming to Yemen by way of Oman, according to one Israeli assessment it is the route of some of this weaponry,” he says. Iran has previously supplied weapons to Hamas through Sudan, but Sudan and Iran had a falling out in 2015.