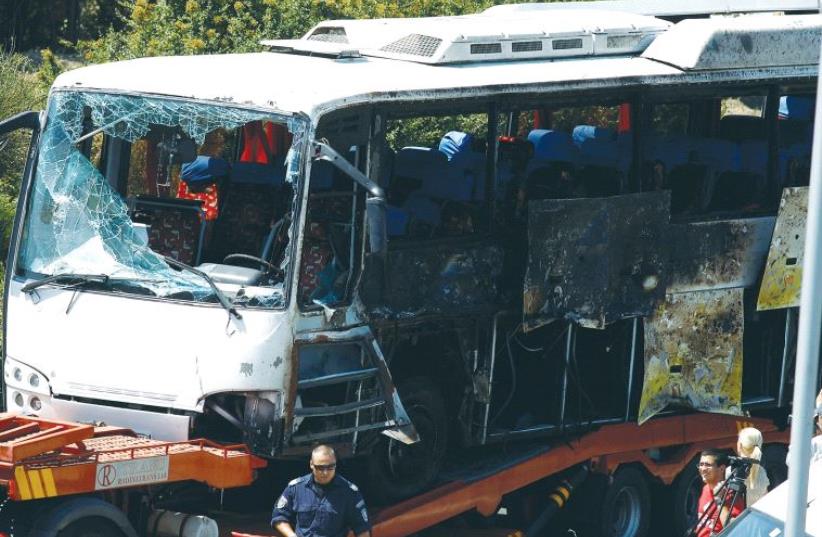 Terrorists attackted this bus in Burgas on July 18, 2012, killing five Israeli vacationers and their Bulgarian driver and wounding 32 others.
(photo credit: REUTERS)
Advertisement
The trial of two Hezbollah operatives who allegedly blew up an Israeli tour bus in 2012 killing five Israelis and their Bulgarian bus driver opened in Sofia, Bulgaria, on Wednesday.The prosecutor, Krasimir Trenchev, told reporters at the specialized court for terrorist crimes that “they will be tried in absentia for a terrorist attack and manslaughter of several people, as well as for a range of other crimes such as document fraud and preparations for an act of terrorism.”The bomb attack also wounded 32 Israelis.The suspects, Lebanese-Australian Meliad Farah and Lebanese-Canadian Hassan El Hajj Hassan, fled to Lebanon. Lebanese authorities have refused to extradite the men to Bulgaria.Interpol has issued arrest warrants for the two men.Court testimony revealed a lack of adequate security measures at the Sarafovo Airport located at the seaside resort town of Burgas near the Black Sea.The Bulgarian News Agency reported that, “there were only two border police officers patrolling that day, who were working a 12 hour shift from 8:00 a.m. to 8:00 p.m. The police officers testified that they did not have the means to check everyone coming into the parking lot and entering the airport. They did not see the bomber, nor did they notice anything suspicious among the people at the airport.”The Bulgarian outlet wrote that Trenchev said that “lax security at the airport at that time had facilitated the bomber.”According to the Bulgarian News Agency, Stoyan Stoyanov, a taxi driver at the airport, testified at the trial that he was “standing some 70 meters away from the bus and heard two explosions a few seconds apart,” adding that, “there was debris scattered in a 50-meter radius from the site of the explosion.”The news agency wrote that “other witnesses said that complete panic and chaos ensued after the explosion.They noted that the bombing occurred on a Wednesday which was not a busy day. The questioned witnesses further said that access to the parking area and to the airport’s terminal was unrestricted at the time and anyone could have entered.”Stoyanov told reporters that security has been significantly enhanced at Sarafovo Airport since the July 18, 2012, terrorist attack. The news agency wrote that “a colleague of Stoyanov said he walked past the suicide bomber and saw him but did not realize it was him.” A third Hezbollah operative, Lebanese-French national Mohamad Hassan el-Husseini, was killed by the blast.It is unclear if Husseini or the two other Hezbollah operatives detonated the bomb.After a seven-month probe, Bulgaria’s then-interior minister Tsvetan Tsvetanov announced in February 2013 that the Lebanese Shi’ite militia Hezbollah was behind the Burgas attack. “We have established that the two were members of the militant wing of Hezbollah,” Tsvetanov said, adding that “there is data showing the financing and connection between Hezbollah and the two suspects.”The European Union based its 2013 designation of Hezbollah’s so-called military wing as a terrorist entity on the Burgas attack.The Netherlands, the US, Canada, Israel and the Arab League classify all of Hezbollah’s organization as a terrorist entity. The British Parliament is set to debate next week whether to declare a full terrorist designation for Hezbollah.Israeli victims and their family members, who are part of the legal action at the Sofia court, were not present at the trial. The Hezbollah trial is slated to continue on February 6 and 7, and Bulgarian Interior Ministry employees are listed to testify.