Sa’ar expressed hope that Netanyahu raises the issue of sovereignty in his meeting with US president Donald Trump in the White House next Wednesday. 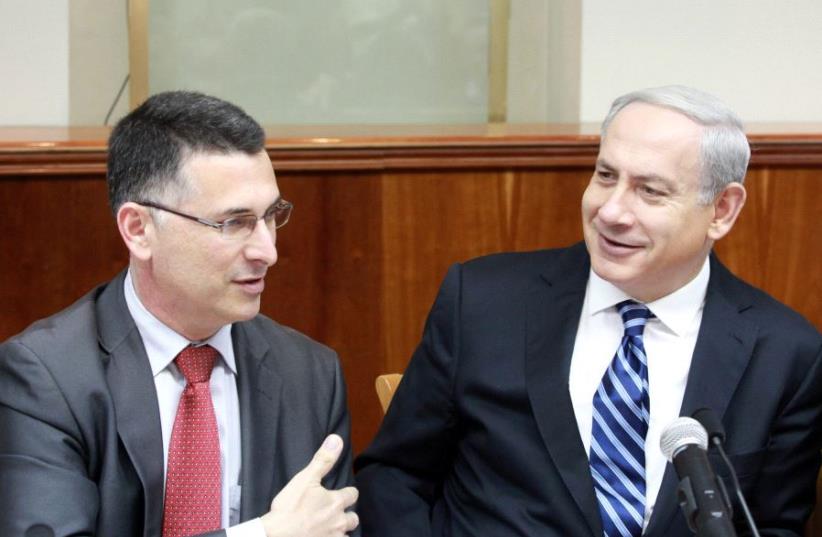 Benjamin Netanyahu with Gideon Sa'ar.
(photo credit: MARC ISRAEL SELLEM/THE JERUSALEM POST)
Advertisement
The effort by the settlement movement to persuade Prime Minister Benjamin Netanyahu to annex Jewish communities in Judea and Samaria gained a boost on Wednesday when his former No. 2 in Likud, Gideon Sa’ar, endorsed the idea.Sa’ar, who has been talked about as a possible replacement for Netanyahu if corruption charges force the prime minister to step down, spoke while on a visit to Hebron and Kiryat Arba. The former education and interior minister also planted a tree in Kiryat Arba.“Applying sovereignty over Jewish communities in Judea and Samaria would be a strategic move that would change reality,” he said.“There is no other way to guarantee normal life for nearly half-a-million Israelis.”Sa’ar expressed hope that Netanyahu raises the issue of sovereignty in his meeting with US president Donald Trump in the White House next Wednesday.Knesset Speaker Yuli Edelstein, who is also a possible Netanyahu successor, defended the controversial settlements regulation law that passed Monday, at a seminar for heads of diplomatic missions from around the world at the Knesset on Wednesday.“When I listen to the criticism from around the world against the regulation law, calling it among other things, the last nail in the coffin of negotiations, I have to ponder whether we are talking about the same law,” he said. “Let’s stick to the facts. The law is not a license to confiscate land.”Edelstein noted that the law deals with land taken in the past, not the future, in places settled with government approval by people who never thought they would be told by anyone to leave their homes. He reminded the diplomats that Palestinians who sell land to Jews face death sentences from the Palestinian Authority.But former Prime Minister’s Office director-general Shimon Sheves warned that settlement outposts were being built “wildly” and that the bill would make a bad situation worse. Sheves dealt closely with settlement construction as a top aide to Yitzhak Rabin when he was defense minister and then as his director-general when he Rabin was prime minister.“This law that passed in the Knesset is against democracy, the government and the Knesset,” Sheves said. “The Knesset passed a bill against itself. The result is 60 injured policemen and soldiers in Amona.”Sheves explained that when Menachem Begin was prime minister, he directed that settlements be built only on state land. New construction had to be approved and checked by the head of the international law department in the IDF legal division and the director of the civil department in the State’s Attorney’s Office before it was brought to the approval of the cabinet and authorized by the defense minister.“This system was maintained until the end of the 1990s, when the settlers started building illegal outposts without government approval and against the views of the defense establishment, some of which were built on private land and absentee owner land,” he said. “I used to be the one who blocked such actions. No one is doing it now.”