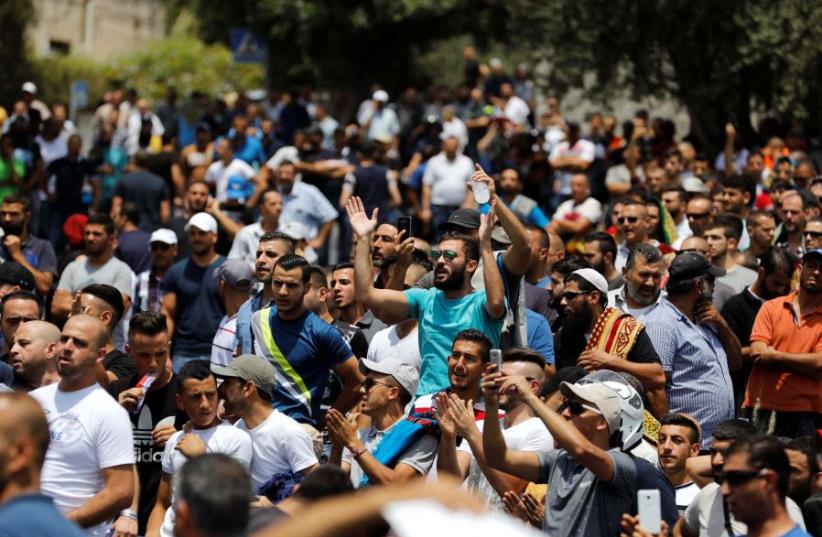 Palestinians shout slogans as they protest outside Jerusalem's Old city July 21, 2017.
(photo credit: REUTERS)
Advertisement
A man passed out sugar-drenched tea in paper cups, one by one, to crowds of young men on Friday night next to the Gate of the Tribes outside Jerusalem’s Temple Mount. As he did, hundreds chanted Islamic refrains to a preacher perched above on a roof haranguing those present.“Allahu akbar,” they said combined with synchronized clapping overhead.“Khaybar, Khaybar, ya yahud, Jaish Muhammad, sa yahud,” was another favorite, which means, “Remember Khaybar, you Jews, the army of Muhammad is returning,” a reference to a battle and massacre of Jews in the seventh century. When Special Patrol Unit (Yasam) riot police marched by, the energized crowd pushed to close the way, but the preacher asked them to show restraint. There would be no violence.The combination of protests and mass prayer that have come to the precipice of rioting every night for a week since the terrorist attack on July 14, and orchestrated attempts to keep violence from spilling over have become hallmarks of a unique civil disobedience in response to the addition of metal detectors at gates to the Temple Mount and compound around al-Aksa Mosque. Since the attack that killed two Israeli policemen, there have been calls from the West Bank Palestinian leadership for a “day of rage” and from Hamas in Gaza for attacks on Israelis. Arab Knesset member Taleb Abu Arar has claimed a third intifada is on the way, but Jerusalem’s local religious leadership has responded differently so far.
Riots throughout the West Bank on Friday, July 21, 2017.
On Saturday, east Jerusalem was mostly quiet as the focus was on the aftermath of a terrorist attack in Neveh Tzuf (Halamish) in the West Bank.Since the July 14 attack, men gathered for mass prayer at security cordons around the Old City, concentrating at Lions’ Gate, which worshipers from parts of east Jerusalem use to get to enter the Old City on their way to the Temple Mount. Whereas Damascus Gate is often used by people coming from farther away, Lions’ Gate is used by locals from adjacent areas such as Silwan and A-Tur. The Gate of the Tribes to the Mount, just inside Lions’ Gate, has become a focal point for nightly protests.While police have increasingly restricted those holding mass prayers outside Lions’ Gate or farther afield, such as near A-Tur, from entering the Old City because of fear of violence, residents of the Old City, tourists from abroad, Red Crescent volunteers, and some young men who have been staying in the city, gather nightly along the road that leads from Lions’ Gate to the Via Dolorosa. There is a parking lot here and a small square called el-Ghazali that is built atop an ancient pool called Birkat Bani Israel, or the Pool of the Tribes of Israel. Across from the square is the Church of St. Anne.Although there have been clashes here during the last week, the general trend has been toward nonviolent prayer-protest. The profoundly religious aspect of this protest can be seen in the lack of Palestinian flags or outward political affiliation of the attendees. On Wednesday a dozen young men chanted against Palestinian Authority President Mahmud Abbas, but in general political speeches have been rare and religious preaching has been common.A video from the protest is posted on the YouTube channel Aqsa Call, which is often shared on Twitter by accounts associated with Hizb ut-Tahrir, an international pan-Islamist organization that has followers in Jerusalem.The generally peaceful prayers and protests ended on Friday around 10 p.m. and men filed home. A Turkish tour group took selfies with a young kid standing a chair shouting “Allahu akbar” at police. One young man was detained in scuffles with  Israeli riot police, but otherwise the crowd and the riot police seemed to understand one another. An invisible red line separates acceptable chanting and anti-Jewish chants, from clashes. This quiet understanding has been on display as police have even moved barricades to accommodate men who place prayer rugs in long lines to pray and avoided walking among them while they do.For a week Jerusalem’s worshipers have carved out this space and the police have allowed it to continue with slight changes in regulations each night, such as restricting access to the Old City by age or by residency. The preachers who attend have successfully corralled hundreds of young men into prayer, rather than running street battles.