An organizer of the protest emphasized it will be “peaceful and nonviolent." 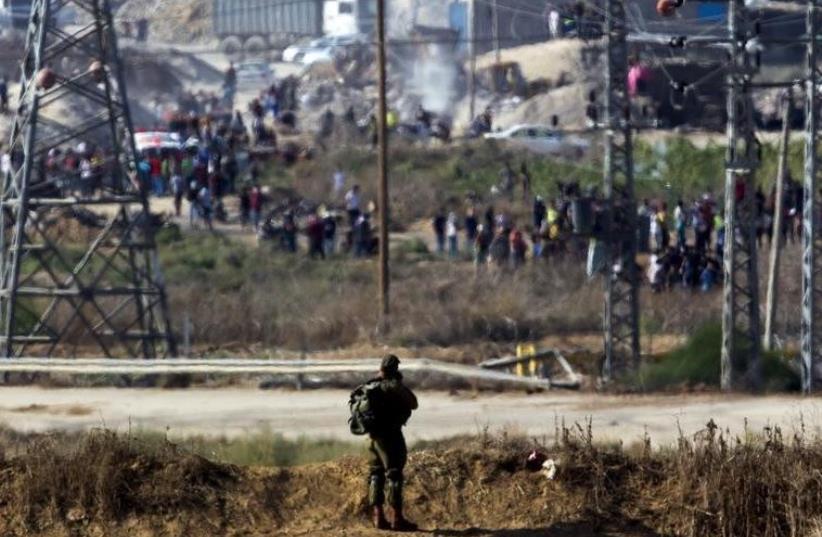 An IDF soldier aims his rifle towards Palestinian protestors during clashes over the border fence between Israel and Gaza, October 11, 2015
(photo credit: REUTERS)
Advertisement
Masses of Palestinians are expected to come to the Gaza border on Friday and move into tents there for a  planned six-week-long protest “to demand the right of return to the homes and villages that they were expelled from in 1948,” Ahmad Abu Ratima, an organizer of the protest, told The Jerusalem Post on Wednesday.The beginning of the protest on Friday is scheduled to coincide with Land Day, in which Palestinians annually commemorate the six Arab-Israelis who Israeli security forces killed during demonstrations in 1976 over government land confiscations in northern Israel.Abu Ratima emphasized that the protest will be “peaceful and nonviolent."“We have even decided that no rocks will be thrown,” he said. “We will be participating in a number of nonviolent activities.”Israel considers much of the border area a restricted zone, and the IDF’s top commander said on Wednesday that live fire will be used, if the protesters threaten Israeli lives.“If there will be a danger to lives, we will authorize live fire,” IDF Chief of Staff Lt.-Gen. Gadi Eisenkot said in interviews published in several Hebrew newspapers on Wednesday. “The orders are to use a lot of force.”
Palestinian rioters breach Gaza border fence
A Related Video You May Like:
A Hamas official told the Post that members of the Hamas-dominated security forces will be present “to maintain stability.”In the past three months, the Gaza border has been the site of several relatively small clashes between Palestinians and security forces.Abu Ratima added that the protesters on Friday will be some 700 meters away from the security fence and will not attempt to breach it.However, he said the protest’s leadership, which is comprised of civil society, independents and political factions, could decide at a later date to approach the border fence.“In the end, we believe it is our right to return to our land in accordance with [UN General Assembly] Resolution 194. While we have not made a decision to go toward the fence, we could in the future,” he said.UN Security Council Resolution 194 says Palestinian refugees “wishing to return to their homes and live at peace with their neighbors should be permitted to do so at the earliest practicable date.”Israel has long rejected the return of Palestinian refugees or their descendants to its territory, arguing that it would undermine its Jewish character.Photos posted on social media on Wednesday show that several tents have already been erected and portable toilets have been placed on the Gazan side of the border.Abu Ratima also said he hopes Israelis will welcome the protest and use it to start building a unified, democratic state including the Gaza Strip and the West Bank.“We believe this is an opportunity for peace, and we call on Israel to take advantage of it,” he said. “We want to get rid of the separation walls and coexist in a democratic state.”