Govberg was killed Tuesday in a terror attack in Jerusalem's Armon Hanatziv neighborhood while on the No.78 Egged bus. 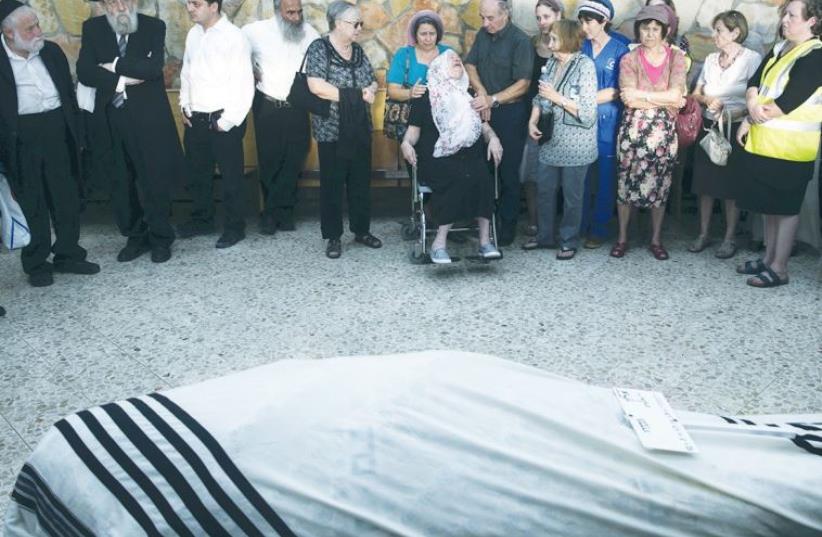 JERUSALEM BUS attack victim Alon Govberg’s wheelchair ridden mother mourns the 51-year-old at his funeral yesterday, attended by hundreds
(photo credit: REUTERS/BAZ RATNER)
Advertisement
“For the sake of my kin and friends, I pray for your well being,” sang hundreds of men and women from all walks of life Wednesday evening at the funeral of Alon Govberg, 51, one of the three victims of Tuesday’s deadly and savage terror attacks in Jerusalem. These words were sung by a crowd of people at Jerusalem’s Har Menuchot cemetery who did not know and had never met Alon, but went to accompany him on his final journey, to honor his life and his death, and to demonstrate what was described by those who eulogized him as the ultimate unity of the Jewish people and its fate. The words of the psalm, sung by the mourners, refer to the city of Jerusalem, the physical heart of the Jewish people, and the psalmist, addressing the city itself, literally prays for the well being of Jerusalem for the sake of his kin and friends, the Jewish people. The psalm was perhaps never so apt as it was when sung Tuesday night in the wake of the two weeks of violence and murder that has beset Jerusalem in the last two weeks and in which Alon died. Govberg was an immigrant from Russia, and lived alone in the capital. His mother is elderly and sick and does not communicate well.  He was killed in the terrorist attack in Jerusalem’s Armon Hanatziv neighborhood. Govberg was unmarried and is thought to have had only one close relative, his mother. Concerned that there would not be enough mourners at his funeral, the Zaka organization issued a public request for anyone who was able to attend and give dignity to his funeral and burial. Hundreds answered this call and proceeded solemnly towards the eulogies hall where his body was laid out and wrapped in a prayer shawl. “We are here next to this martyr, who was killed by evil people as he was traveling on a bus in Jerusalem in the middle of the day, killed for no reason,” eulogized Chief Rabbi of Jerusalem Aryeh Stern at the funeral. “‘Earth, do not cover his blood,’” cited the rabbi from Jewish liturgy. “We cannot accept or reconcile ourselves to people coming and killing good, innocent people in this random way. Innocent is not even the word here, people are being murdered simply because they are Jews,” Stern declared.  “Alon, our beloved,” the rabbi continued. “You have merited an escort by a great congregation of people, which shows the connection of the Jewish people to each other, a feeling of partnership which we should strive to develop in our every days lives and not just times such as this.”The eulogies were short and few, but at their end the crowd sang with deep emotion and feeling the prayer said at times of trouble and distress for the Jewish people “Acheinu kol beit yisrael,” (our brothers, the whole house of Israel), and the words of psalm 122 requesting peace for Jerusalem and its inhabitants. The mourners came from many walks of Israeli life, secular, national-religious, and haredi, immigrants and native born Israelis, young and old alike, and and hundreds accompanied the funeral procession to Govberg’s final resting place. Simeon, 44, a resident of Jerusalem, said he heard the request to come to the funeral in the news. “He was a resident of Jerusalem, one of us, a Jew,” said Simeon. “That these hundreds of people came to his funeral shows us that we united as a people, and shows to the entire world that they will not break us. I wanted to identify with this, and so I came.”And several of the mourners expressed a common sentiment, that the wave of recent terror attacks could be directed at anyone, at any time, and that no-one is immune from the current outbreak of violence.Ilanit, 43, left work early to attend the funeral, and met up with her daughter Yahalom,18, to attend the ceremony and procession. Ilanit noted that Govberg had no family, and that the it was therefore the responsibility of his wider family, to accompany him at his funeral. “The Jewish people is one big family, and we came to escort him,” she said.“There is a pain in every one of us in the nation, also in those who have not come here, and we are identifying with that which we are experiencing here. With the suspicion, with the fear. And this, what’s happening, is unthinkable. This is not how a normal war is fought in any other part of the world. “And it could happen to anyone of us, and so we came. Yisrael Ze’ev, 65, said, like Stern, that Govberg was killed because he was a Jew. “It could have been any Jew [that was killed], he was killed because he was a Jew, so that’s me, that’s all of us, it touches a raw nerve and that's why we’re here.”