The cousin of a 16-year-old murdered in 2014 is accused of plotting an attack on Jews. 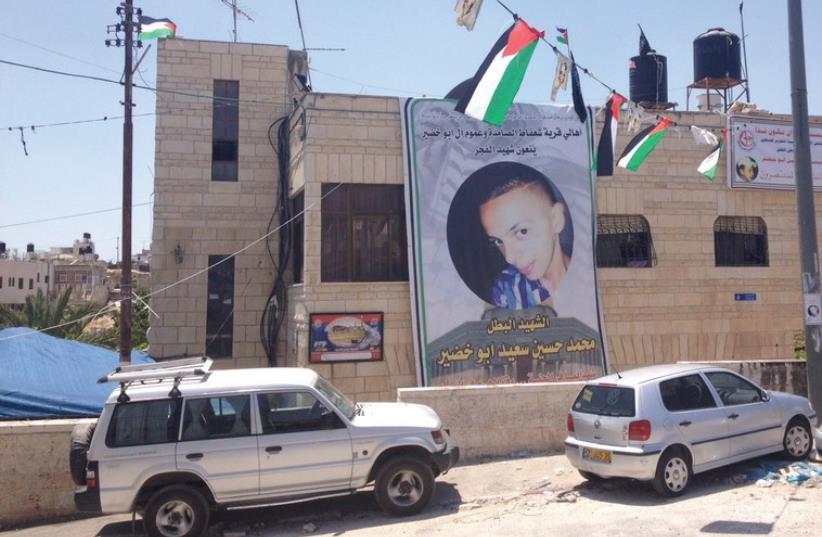 A poster of Muhammad Abu Khdeir hangs from the family home in Shuafat where mourners gathered after his burned body was found on July 2.
(photo credit: SETH J. FRANTZMAN)
Advertisement
The cousin of an east Jerusalem minor who was brutally burned to death in 2014 was indicted on Monday for involvement in a terror cell plotting a shooting attack on Jews driving on a road near Nablus.Both the 22-year-old, indicted in the Jerusalem District Court along with two others, and his 16-year-old cousin, who was murdered by Jewish terrorist Yosef Chaim Ben David in July 2014, are named Muhammad Abu Khdeir.According to the indictment, three east Jerusalem residents had been planning a shooting attack on Jews since March as part of their membership in the Popular Front for the Liberation of Palestine (PFLP).They had made numerous attempts to pay thousands of shekels to acquire a range of weapons, including an M-16, carried out training exercises with a Carlo rifle, met with PFLP coordinators to pick an attack location and considered planting a car bomb to attack a police car.
At least two of the three defendants also engaged in in rock throwing and public disorder against security forces.Collectively, they are charged with a terrorist conspiracy to commit murder, membership in a terror organization, various weapons-related crimes and attempts to attack policemen.The indictment did not mention if the murder of Abu Khdeir's 16-year-old cousin was the motivation for the defendant's actions, though many Arabs and Palestinians who turn to violence have made such claims.