Both a female IDF soldier and four Israelis were attacked in separate incidents on Monday. 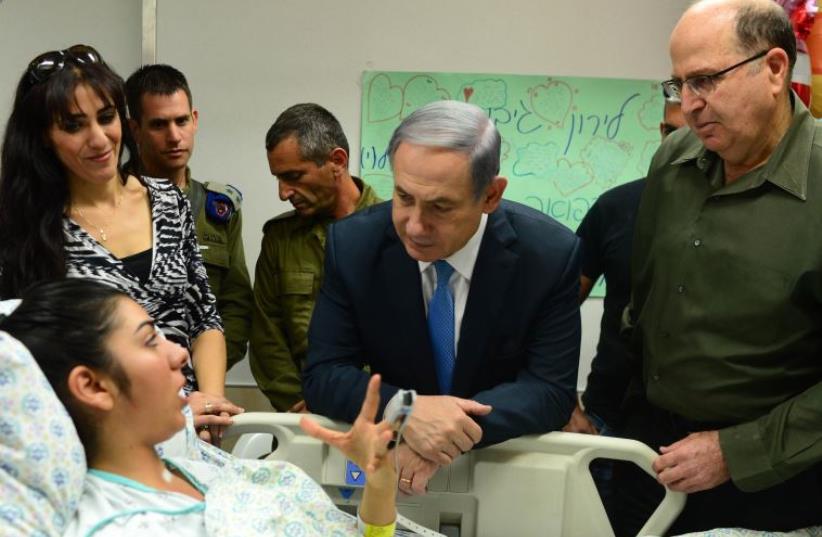 Netanyahu and Ya'alon visit terrorist victims
(photo credit: KOBI GIDEON/GPO)
Advertisement
Prime Minister Benjamin Netanyahu visited the four Israelis who were wounded in two separate terrorist attacks over the last two days, and from near their beds at Jerusalem’s Hadassah University Medical Center, Ein Kerem, sent condolences to Egypt for the terrorist attacks that rocked that country on Wednesday.“Terrorism is knocking on our borders,” he said. “Islamic State is not only across from the Golan Heights, it is also in Egypt, across from Rafah – in other words, across from our borders. And we are together with Egypt and many other states in the Middle East and the world in the struggle against extreme Islamic terrorism.”While the terrorists have managed to strike within Israel over the last few days, Netanyahu said the IDF and the security services had “thwarted more than 200 terrorist attempts from the start of last year.”He pledged that Israel would apprehend those responsible for the recent attacks and “extract a heavy price from the terrorists and those who dispatch them and support them.”Defense Minister Moshe Ya’alon, who joined him on the hospital visit, said the current spate of terrorism was encouraged by Iran, funded by Hamas, and fed by incitement in the Palestinian Authority.“There is Islamic terrorism through the Middle East,” he said, “and I want to send my condolences from here to the Egyptian people.”He said it was incumbent upon Israel and other states confronting terrorism to cooperate in order to prevent it from “rearing its head.And I believe this is what will happen.”Both he and Netanyahu sent condolences to the parents of Malachi Rosenfeld, who was fatally shot on Monday evening near Shvut Rahel, and who was buried on Wednesday.Several hundred mourners attended the funeral of the 26-year old in Kochav Hashahar. Among the speakers at the funeral was Education Minister Naftali Bennett.“Our enemy is not a partner for peace,” Bennett declared. “His life revolves around terrorism, and he will receive the treatment reserved for terrorists.”