"As prime minister of Israel, as the one who carries the security of Israel on his shoulders, it is my duty to make decisions calmly and in an informed manner."

Israeli Prime Minister Benjamin Netanyahu attends the weekly cabinet meeting in Jerusalem July 30, 2017.
(photo credit: REUTERS)
Advertisement
Prime Minister Benjamin Netanyahu defended his much-maligned handling of the Temple Mount crisis, telling his cabinet on Sunday that he sees a bigger picture that not everyone is privy to, and as the person with ultimate responsibility for the country’s security, he must take a much wider view of events.“I am in tune with the emotions of the public, I understand the feelings, I know that the decision that we made [to remove the security measures on the Temple Mount] was not an easy one,” Netanyahu said at the start of the weekly meeting. “However, as prime minister of Israel, as the one who carries the security of Israel on his shoulders, it is my duty to make decisions calmly and with good judgment.”“I make these decisions while looking at the entire map, with a broad view of the challenges and threats that we are facing, some of which the public is not aware of and which I cannot make public,” he said.“I understand the feeling of the public. I also understand the duty of leadership, of what it is to sit in this chair and carry on my shoulders the ultimate responsibility for Israel’s security, and I am acting accordingly.”Netanyahu has come under withering criticism from both the Left and the Right for his handling of the crisis: first for the decision to place metal detectors at the site without holding a security cabinet meeting on the matter or consulting with the Jordanians and the Palestinians; then for removing the metal detectors, seemingly giving the Palestinians a “victory.” 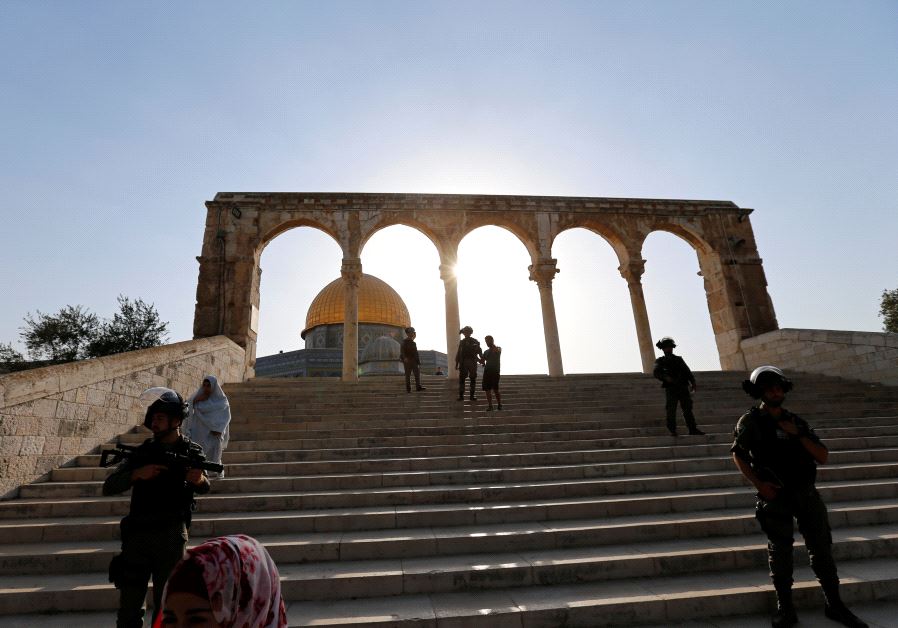 Israeli security forces stand at the compound known to Muslims as Noble Sanctuary and to Jews as Temple Mount, after Israel removed all security measures it had installed at the compound, and Palestinians entered the compound in Jerusalem's Old City July 27, 2017. (Reuters)A Channel 2 poll last week found that fully 77% of the population believed removing the metal detectors was a surrender to the Palestinians. Sixty-eight percent said the government was correct in initially installing the metal detectors, while 67% said they did not believe Netanyahu handled the crisis well.At the cabinet meeting, Netanyahu thanked the security forces for their efforts over the last two weeks, during which the number of soldiers and police across the capital has been bolstered.“These have been two busy weeks for our security forces who are in a permanent state of readiness ahead of further major challenges in the days ahead,” he said.“On behalf of all Israeli citizens, I want to thank the commanders and soldiers, the police and Shin Bet operatives who are working day and night to defend all of us.I greatly appreciate their work and their deep dedication to Israel’s security.”Netanyahu’s praise for the Shin Bet (Israel Security Agency) came against the backdrop of sharp criticism of the organization by some on the Right flank of his party.Netanyahu told the cabinet that in recent days he directed the police to send in reinforcements to patrol the Temple Mount and the Old City “in order to prevent attacks and disturbances, and also to act aggressively against lawbreakers.”He also said an additional NIS 100 million has been allocated for the development and purchase of technological solutions that will enhance security at the site.Eytan Halon contributed to this report.