Netanyahu: No decision made yet on Temple Mount metal detectors 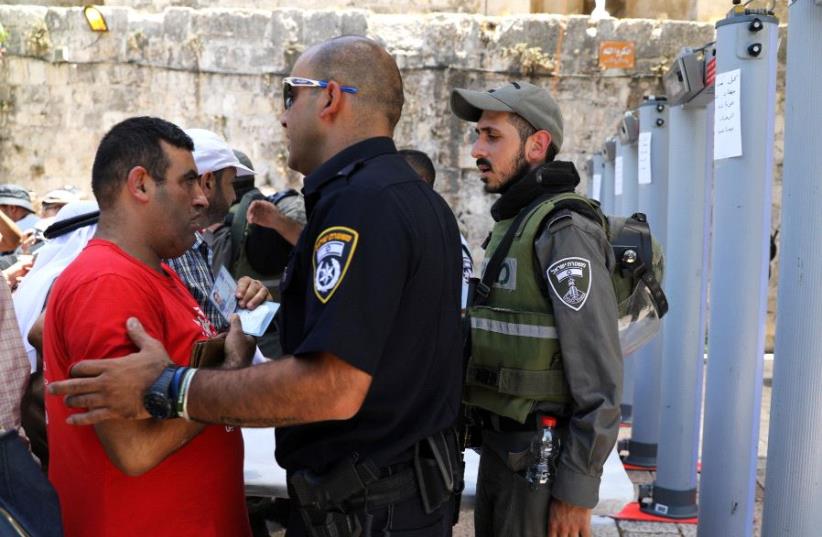 An Israeli police officer checks the identity of a Palestinian man next to newly installed metal detectors at an entrance to the compound known to Muslims as Noble Sanctuary and to Jews as Temple Mount, in Jerusalem's Old City July 16, 2017.
(photo credit: AMMAR AWAD / REUTERS)
Advertisement
Israel is reaching out to the Arab world to explain that the installation of metal detectors at the entrances to the Temple Mount is not a change of the status quo, but meant only to prevent the use of weapons at the site, Prime Minister Benjamin Netanyahu said on Wednesday.Netanyahu, in a briefing with reporters in Budapest where he met with the leaders of Hungary, Poland, the Czech Republic and Slovakia, said that there is no change in Israel’s position regarding the need for the metal detectors.He held phone consultations on the matter with senior security officials on Wednesday, but no decision was taken on whether to remove the devices.Netanyahu said there will be other security consultations that he cannot discuss.“We want to solve the crisis in the quietest way possible, and return the quiet,” he said. “We are speaking with the Arab world, and explaining that there is no change in the status quo [on the Temple Mount]. This is a measure to prevent the use of weapons on the Temple Mount, something that happened for the first time.”Netanyahu, who earlier this week was in Paris, pointed out that there are metal detectors at the Eiffel Tower because of the security situation there, and that more people visit that site than the Temple Mount.The Shin Bet (Israel Security Agency) and the IDF said that the use of the metal detectors isn’t necessary, and recommended instead that an agreement on the matter be reached, Channel 2 reported Wednesday night.The metal detectors were placed at the entrances to the Temple Mount in the aftermath of Friday’s attack just outside the site in which terrorists killed two Border Police officers and then ran into the Temple Mount compound.Police shut down the Temple Mount for two days, but reopened it again on Sunday after setting up metal detectors.Muslim worshipers on Wednesday refused for the fourth consecutive day to enter the site to protest the installation of metal detectors, and instead prayed just outside the compound.Clashes broke out between Palestinians and police near Lions’ Gate on Wednesday evening, with the crowd growing as night fell.There are now metal detectors between the Lions’ Gate entrance to the capital’s Old City, and the Gate of the Tribes (Bab al-Asbat) entrance to the Temple Mount.Some 200 men stood outside Lions’ Gate chanting “God is great.” Hundreds more Old City residents gathered inside the gate. Police blocked off that section of the Old City and would only allow residents to pass.Palestinians have called for a “day of rage” on Friday to protest the metal detectors, urging Muslims to head to the Old City to pray just outside the Temple Mount.Jerusalem Mayor Nir Barkat said, “I suggest that the protesters turn their rage against the terrorists who created a need [for the detectors] and not at the police.“Muslim and international leaders must clarify that the Temple Mount can’t serve as a refuge or an organizational location for terrorists and murders,” Barkat said.On Wednesday morning, police closed the compound to non-Muslim visitors, due to some visitors “breaching the rules of conduct that apply to the holy site.”MK Bezalel Smotrich (Bayit Yehudi) criticized the use of metal detectors and said that in these times our strength is being tested.“This is an outrageous move of collective punishment that is providing a tailwind to terrorism,” said Smotrich. “The Wakf [Islamic trust] people and Israeli Arabs decided to open a wave of riots because of the installation of metal scanners, and now they are closing the Temple Mount because of some mumbling of [prayer] verses?” Smotrich then called on Jerusalem Police head Asst.- Ch. Yoram Halevy to reopen the Mount to non-Muslims.“Our next steps will test our sovereignty here; we should not repeat past mistakes.”Deputy Foreign Minister Tzipi Hotovely called the closure a mistake and reiterated the call to open the site for Jews.“There are days in which we should strengthen our sovereignty on the Temple Mount, and make it clear that we are not intimidated by threats.“It can’t be that in the holiest place for Jews, they should feel that their status is lower than that of tourists.”Later on, the site was reopened and dozens of non-Muslim visitors entered the site.Restrictions are normally imposed on Jewish visitors to the compound, forbidding them to walk around freely or to pray. There are normally four hours a day in which non-Muslims can enter the site, a three-hour period in the morning, and one hour in the afternoon.Few heeded the call for Wednesday’s day of rage in Jerusalem and the West Bank although sporadic clashes did break out.In the area of Rachel’s Tomb on the northern edge of Bethlehem and at the Kalandiya checkpoint between Jerusalem and Ramallah, scores of Palestinian rioters threw stones at security personnel, who dispersed them, according to a police spokeswoman.Two Palestinian rioters were arrested in Bethlehem, she added.In the Shuafat refugee camp in northeastern Jerusalem, Palestinians threw stones at security personnel, the spokeswoman said. Police arrested one masked rioter who had a Molotov cocktail, she added.Violence also broke out on Tuesday night and early Wednesday between security personnel and Palestinians near Lions’ Gate.The violence began after the evening prayer and continued into the early morning. It is unclear what sparked the violence.According to Palestinian sources, 34 Palestinians have been reported injured among the hundreds of rioters near Lions’ Gate.One of those reportedly injured is Sheikh Akram a-Sabri, al-Aksa’s preacher and the former mufti of Jerusalem.Two policemen were lightly injured during the clashes.A police spokesman said that the rioters threw Molotov cocktails and rocks at officers situated next to Lions’ Gate.He added that the rioters were dispersed from the area.Tovah Lazaroff and Seth J. Frantzman contributed to this report.