Despite Obama’s efforts, the paper said, he “may be presiding over the death of the two-state solution.” 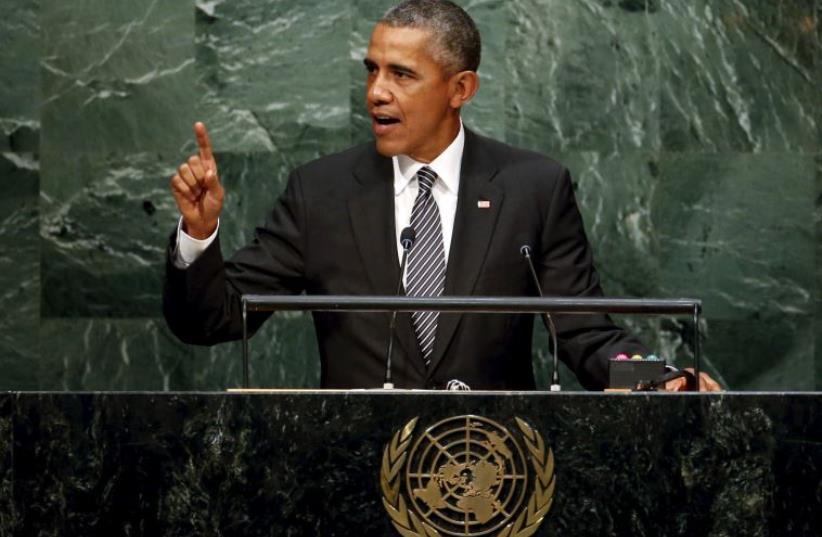 US President Barack Obama addresses United Nations General Assembly
(photo credit: REUTERS)
Advertisement
A non-binding United Nations Security Council resolution on the two-state solution may be the next best step in resolving the Israeli-Palestinian conflict, stated a New York Times editorial published on Monday.“There are several options, but the best may be a resolution that puts the United Nations Security Council on record supporting the basic principles of a deal covering borders, the future of Jerusalem, Palestinian refugees, security and land swaps, but not imposing anything on the two parties,” the editorial stated.It spoke disparagingly of the possibility that Prime Minister Benjamin Netanyahu, Palestinian Authority President Mahmoud Abbas and US President Barack Obama could make peace in the near future.The paper stated that Netanyahu had “never shown a serious willingness” to progress toward a peace deal, “as is made clear by his expansion of Israeli settlements, which reduce the land available for a Palestinian state.”It described Abbas as “a weak and aging leader who has given up on peace.”Despite Obama’s efforts, the paper said, he “may be presiding over the death of the two-state solution.” A US push for a security council resolution, even one such as the New York Times proposed, would mark a break from the Obama Administration's position that direct talks between the two parties was the best way to resolve the conflict and arrive at a two-state solution.Last fall, however, US officials in Washington said that the president did not expect to arrive at a two-state solution by the time he leaves office in January 2017. Since then the US has pushed for a plan that would move the process forward so that the next administration could best arrive at a two-state solution. In the absence of a US led peace process, France on Monday unveiled for the European Union its plan to jump-start the peace process by holding a multilateral peace conference this summer.