‘Our mandate is to isolate Israel,’ BDS leader tells 'Post'

Kwara Kekana of BDS South Africa denies accusations of anti-Semitism, explaining that the campaign has Jews among its adherents. 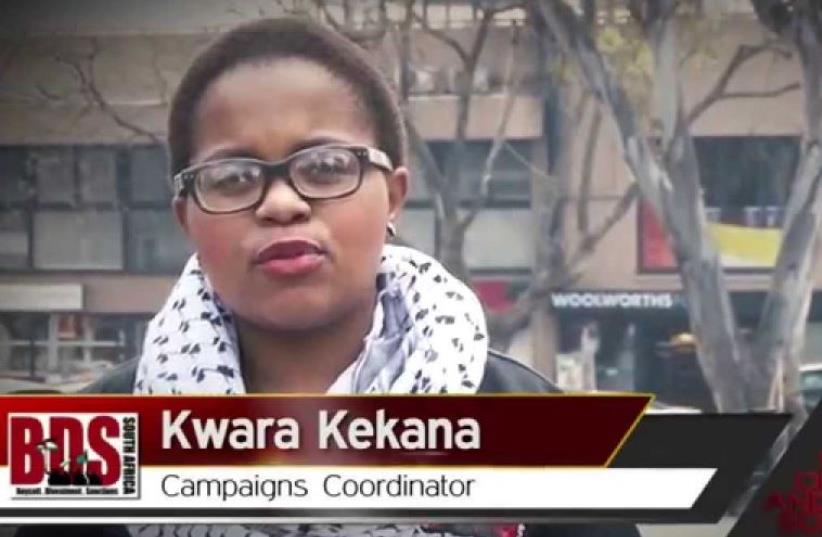 Kwara Kekana, BDS activist
(photo credit: BDS SOUTH AFRICA)
Advertisement
The mandate of the international Boycott, Divestment and Sanctions campaign is “to isolate Israel,” a spokeswoman for the movement told The Jerusalem Post on Tuesday.Interviewed by phone, Kwara Kekana of BDS South Africa denied accusations leveled by Jewish organizations that her organization is anti-Semitic, a claim heard increasingly as companies such as France’s Orange appear to be buckling under pressure to sever ties with the Jewish state.The BDS movement’s branch in South Africa has been one of the most vocal worldwide, and has been involved in a series of high-profile incidents that have caused vocal outrage among Jewish communal bodies.In 2013 one of the movement’s leaders justified calls to “shoot the Jew” heard during a protest against a concert by an Israeli musician. During that incident, protesters screamed at concertgoers slogans such as “Israel is apartheid” and “Down, down Israel.” Some also threw paper at the Jewish attendees.The call to kill Jews was “just like you would say ‘Kill the Boer’ at [a] funeral during the ’80s [and] it wasn’t about killing white people. It was used as a way of identifying with the apartheid regime,” BDS coordinator Muhammed Desai said at the time.Asked if the group is hostile to Jews, Prof. Farid Esack, writing on behalf of the board of BDS South Africa, expressed his opposition to “any and all incitement to violence and racism – including anti-Semitism and Zionism.”More recently the movement hosted convicted Palestinian airline hijacker Leila Khaled on a nationwide speaking tour. In an email to supporters, organizers termed her an icon of the Palestinian struggle, showing an image of the PFLP member clutching an automatic weapon and comparing her to president Nelson Mandela.“Many Palestinians including Leila Khaled are today considered terrorists like the ANC and Nelson Mandela were once classified as terrorists,” the group declared. “The picture of a young, determined looking woman with a checkered keffiyeh scarf, clutching an AK-47, was as era-defining as that of Che Guevara, Ruth First and other political figures from our recent past.”At the time, Kekana said she did not expect the South African Jewish Board of Deputies, which condemned the tour, to understand “the meaning of hosting someone like Nelson Mandela, the South African struggle icon, or Leila Khaled, the Palestinian struggle icon.”The Jewish communal group, she said, had proudly supported the apartheid regime, just as it supports an Israeli “regime that is killing innocent Palestinians.”Jewish ire at the group continued to build in April, when a diplomatic spat between Pretoria and Jerusalem prompted the BDS movement and allied organizations to threaten to “take it upon ourselves to be at the Israeli Embassy… to expel the Israeli ambassador.”The movement also complained about the “Israel lobby.”Kekana denied accusations of anti-Semitism, explaining that the campaign has Jews among its adherents.“Oftentimes there is a discussion BDS being anti-Semitic which is completely false. BDS if anything subscribes to peace.Against all forms of racism, which includes anti-Semitism, xenophobia, you can name it,” she said.Asked if she believes that Israel has a right to exist or if Zionism is a form of racism, she responded by explaining that “the current form that Zionism as an ideology is being applied today” constitutes a “fundamental problem” for her.Another such issue is “the way in which Israel wishes to exist at the expense of an indigenous population,” she said. “It wishes to exist in a state that wishes to exclude another group and also wants to exist at the expense of an indigenous population.”Her mandate is to “isolate the apartheid state of Israel until it listens to international law” and gives in to three “nonnegotiable” demands: the end of its occupation of lands claimed by the Palestinians, the end of “apartheid” and acceptance of the Palestinian right of return.Asked if going outside of the framework of negotiations to pressure Israel would make it less likely that a negotiated solution could be reached, she said the issue of talks is up to the political leadership of the Palestinians and her only concern is getting Israel to begin “complying with international law.”Negotiations, she added, have to be undertaken in good faith and cannot go ahead while Arab “political prisoners” remain in Israeli jails or while there is any building in settlements.Negotiations under such a state are ridiculous, she said, indicating that she believes that negotiations between the two sides could commence only once Israel has been isolated and made to comply with her movement’s demands.The general consensus among the international community is that issues such as Jerusalem, borders and refugees must be dealt with in negotiations.Despite the presence of Arabs in the Knesset and the Supreme Court, she insisted that Israel meets the definition of an apartheid state under a United Nations definition.Asked how a right of return might be implemented, especially given the Israeli reluctance to give in on a point that many believe to be demographic suicide for the state’s Jewish majority, she said that she does not know what it would mean at the end of the day.“What is a right of return? I think that we really need to start having those discussions.The preoccupation right now is not about creating peaceful agreements, and I don’t think we are there yet. We are not at a point where we need to be discussing what the right of return itself needs to look like. For one now Israel does not acknowledge the fact that Palestinians have a right to return to indigenous land,” she said.In an interview this week with the Arab website Bokra which was also run by 972 Magazine, Omar Barghouti, one of the founders of the international movement, stated that the “Oslo accords disenfranchised Palestinians in the 1948 region, causing a serious rift. On the contrary, the BDS movement insists on the right of all Palestinians to exercise self-determination as a unified people and, as such, insists on the rights of all Palestinians, including ‘48 Palestinians.”