The Palestinian factions behind the protest issued a statement strongly condemning the security forces. 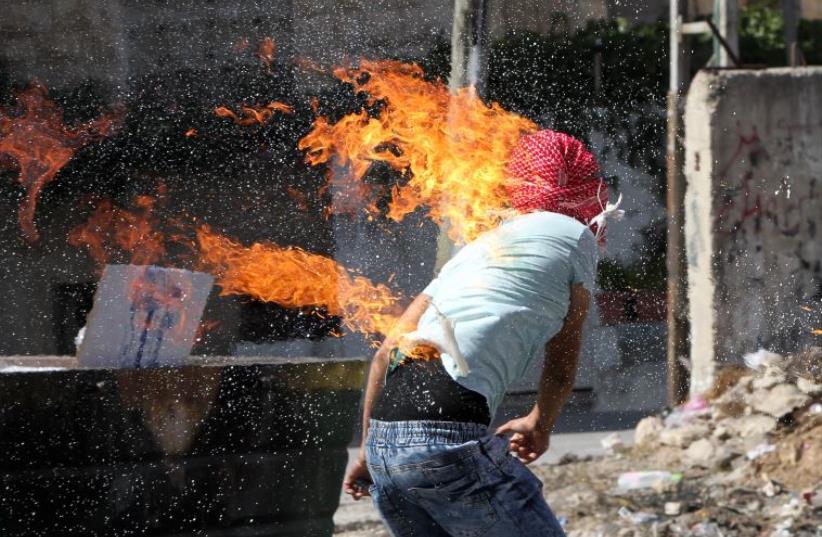 A Palestinian accidentally sets himself on fire after throwing a Molotov cocktail‏
(photo credit: HAZEM BADER / AFP)
Advertisement
In the first incident of its kind since the beginning of the current wave of terrorism, Palestinian Authority security personnel on Friday used force to prevent Palestinians from clashing with IDF soldiers in north of Ramallah.The incident triggered a wave of condemnations against the PA, with many Palestinians accusing it of working with Israel to “abort the intifada.”The incident began when hundreds of Palestinians belonging to various factions, including Popular Front for the Liberation of Palestine and Democratic Front for the Liberation of Palestine, tried to march toward the Beit El junction, north of Ramallah – a scene of weekly confrontations between Palestinian stone-throwers and IDF soldiers.The march was part of another “day of rage” against Israel that was organized by “national and Islamic forces” in Ramallah.At first, Palestinian security officers tried to persuade the protesters not to approach the junction, but when they insisted on passing through Palestinian security lines, the officers, some of whom were dressed in training suits, used force to disperse them.The security officers also assaulted a number of Palestinian journalists at the scene. One photojournalist later posted photos of the security officers on his Facebook page and urged people to identify them so they could be punished.The Palestinian factions behind the protest issued a statement strongly condemning the security forces.“This violent and unjustified behavior is strange to our people’s traditions,” the statement read. “Such actions only serve the interests of the Israeli occupation and deepen divisions between the youths and people on one hand and the Palestinian security forces and its leaders on the other.”The statement called on the PA leadership to reconsider its position toward the “intifada and abide by its national and moral duties to protect the Palestinians and respect their traditions.”Hamas and Islamic Jihad also denounced the PA for breaking up the Ramallah protest, saying the demonstrators were seeking to protest against Israeli “crimes” and the withholding of bodies of Palestinian assailants killed while trying to attack Israelis.The two groups also accused the PA of working with Israel to “abort the intifada,” and said the assault on the journalists reflected PA security forces’ fear of the media.In a separate statement, the PFLP accused the PA of adopting an “iron-fist” policy against its people and vowed to pursue and step up confrontations with the IDF.“The Palestinian Authority is making a big mistake by trying to suppress and abort the intifada,” commented Palestinian political analyst Jibril Odeh.“The Palestinian Authority does not have the power and legitimacy to suppress the masses. These oppressive measures against the intifada and its youths will make the Palestinian Authority a partner of the anti-intifada forces and this poses a serious threat to the Palestinian Authority and its presence in the West Bank,” he said.