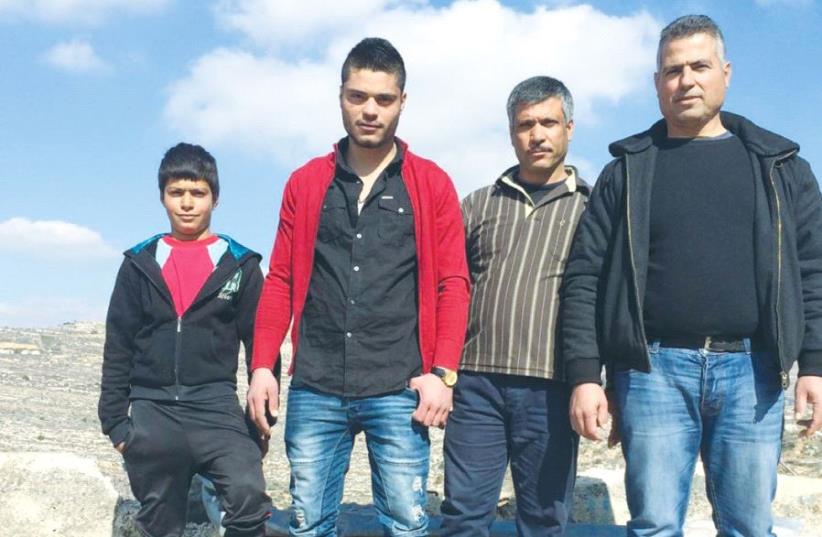 THE AL-AZZEH FAMILY stands yesterday near the ledge where the bus fell in Lubban Sharkiya, south of Nablus. From left: Mahdi al-Azzeh Samih al-Azzeh, Samir al-Azzeh and Jamal al-Azzeh
(photo credit: ADAM RASGON)
Advertisement
All 13 members of the Azzeh family had already brushed their teeth, changed into their pajamas and were in for the night last Thursday, when all of a sudden, a powerful boom outside their home startled them awake.“We all heard the bang and had no idea what happened,” said Jamal al-Azzeh, a 50-year-old construction worker, recounting the harrowing events of the stormy night outside his home on the ridge of Lubban Sharkiya, a small Palestinian village south of Nablus.Jamal and his 12 family members immediately ran outside, into the rain, and noticed a bus, which had been on its way to the nearby settlement of Ma’aleh Levona, had broken though a protective barrier separating the road and the cliff adjacent to their home, falling hundreds of feet before landing on the flat agricultural lands below.“We then all ran down the side of the hill and saw that there were injured people all over the place, a great disaster had taken place,” Jamal said.“I’m not sure how we got the bottom of the hill with all the rocks and thorny plants, but we made it there within a minute.”
Broken area of the guard rail where the bus fell. (Credit: Adam Rason)
Jamal hurriedly pulled out his cellphone and called the police and civil defense to come to the site of the accident.When the Azzeh family reached the passengers, they realized that two of them, the bus driver, Avishai Kroani, and a passenger, Ofir Rachmanov, were dead, while seven others had been wounded.“We retrieved the bodies of the deceased and tried to reassure the wounded that they would be okay,” Jamal said. “At first, many of them looked at us as if they were frightened we may do something to hurt them, but we told them in the little Hebrew we know that we called the authorities and were here to help.”Jamal’s nephew Samih al-Azzeh, 23, ran over to one the injured passengers and, realizing that he was very cold, offered him his jacket.“I wanted to help in any way that I could,” said Samih, who is also a construction worker.Minutes later, soldiers, police officers and civil defense members arrived and, together with the Azzeh family, worked for five hours straight to evacuate the dead bodies and wounded civilians.“We worked with them [until] six in the morning, explaining what had happened and showing them where all of the injured people were located,” Jamal stated.The Azzeh family’s decision to help the victims of Thursday’s bus crash stands out in light of the ongoing tensions between the IDF, settlers and Palestinians in the northern West Bank, where the groups often clash.In the past year alone, a number of violent incidents have taken place just a few kilometers away from the Azzeh household at the Tapuah Junction, which some Palestinians refer to as “the circle of death.”Jamal, Samih, and other members of the Azzeh family said they didn’t think about the broader political context around them when they went to aid the bus crash victims.“We acted because the victims of the bus crash are people. Our lord does not allow us not to help them,” Jamal remarked. “It did not matter that they were Jews – we would have helped anyone.”Jamal added that he and his wife believe it is important to consider other people’s humanity before anything else.“We grew up with the values of love, tolerance and peace, and we teach our kids these values as well,” Jamal said. “We gain nothing from despising and hating others.”Samih concurred with his uncle, emphasizing that the background of the victims made no difference to him.“I saw wounded souls and I went to provide them aid. My religion does not permit me to discriminate,” Samih said.The Azzeh family has been busy receiving phone calls thanking them over the past two days. A number of IDF officials have visited them and the army coordinator’s office granted them certificates of appreciation on Sunday for their actions.Sivan Raviv, the Binyamin Brigade’s medical officer, said the army is deeply appreciative and thankful for the actions of the Azzeh family.“It was unbelievable to see this Palestinian family go out into a storm in the middle of the night in their pajamas,” Raviv said during a phone interview.“When dealing with wounded people, everyone knows that each minute is critical and the fact that they called us immediately and went to help the passengers made a huge difference – we are thankful for what they did.”On Monday, visitors stopped to ask the Azzeh family about what happened. One Palestinian visitor got out of his car and told Jamal that what his family did “is heroic work for which he should be proud.” While a majority of their neighbors have been supportive of their actions, the family said that a small minority have criticized them for helping the Jewish bus crash victims.Jamal said that he hopes that Thursday’s events will send a message that the Palestinian people are normal and humane.“I hope everyone will realize that [we] are a people that wants peace. We are totally against killing and slaughter of either side,” Jamal said. “But it is also important that I stress that we want to be free and do not want to be shackled in our homeland. I hope what happened the other day shows that coexistence is possible and important.”