The PA's foreign ministry gave the example of a Palestinian terrorist shot after stabbing an Israeli as one of the 'summary executions.' 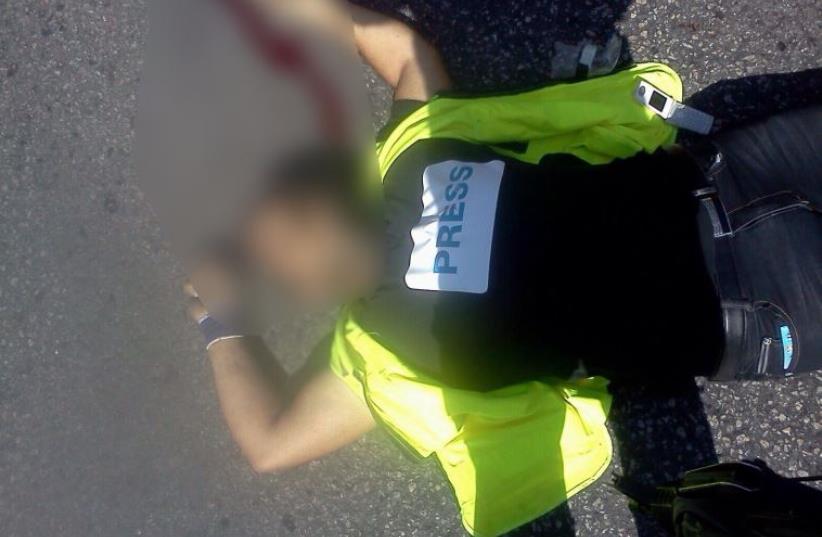 Palestinian terrorist dressed as a journalist who stabbed soldier on October 16, 2105 near Hebron
(photo credit: ARAB MEDIA)
Advertisement
The Palestinian Authority on Sunday launched a scathing attack on Israel, accusing Prime Minister Benjamin Netanyahu of authorizing “summary executions” of Palestinian “civilians."Meanwhile, PA officials said no date has been set for a meeting between PA President Mahmoud Abbas and US Secretary of State John Kerry.Kerry is scheduled to meet with Netanyahu later this week in Germany.The PA Foreign Ministry said that the “summary executions” were a sign of “growing terrorism, racism and extremism” among IDF soldiers and settlers.The ministry said that the Palestinians have begun documenting Israeli “summary executions” and “incitement” in order to file a complaint against Israel with the International Criminal Court.It repeated the call for an international commission of inquiry into Israeli “crimes” against Palestinians.The ministry claimed that 18-year-old Fadel Qawassmeh, who was killed in Hebron on Saturday after he tried to stab a settler, was an innocent man who had been “executed in cold blood.” It accused IDF soldiers of placing a knife near the body of Qawassmeh after he was shot to make it look as if this “crime” was an “act of self-defense.”PA Prime Minister Rami Hamdallah urged the Quartet members – US, Russia, EU and UN – to intervene to “stop all Israeli crimes and assaults” against Palestinians. He also called for the resumption of the peace process in order to “end occupation and create a Palestinian state with Jerusalem as its capital.”Hamdallah too accused Israel of killing “innocent Palestinians, especially women and children.” He also denounced Israel for “inciting” against the Palestinians.