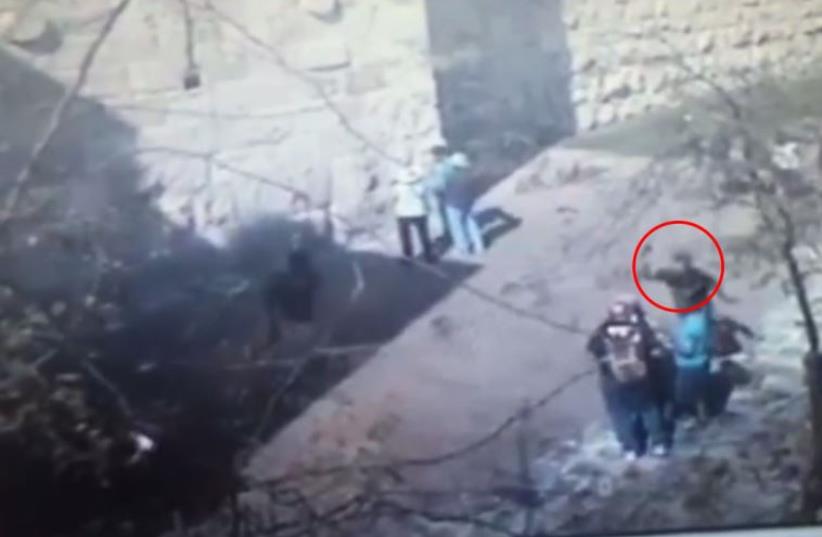 Tour guide attacked outside Jaffa Gate in the Old City
(photo credit: screenshot)
Advertisement
A Palestinian man from east Jerusalem was indicted by the Jerusalem District Court on Monday, one week after allegedly attacking a Jewish female tour guide with a glass bottle near the Old City’s Jaffa Gate in an apparent hate crime.According to the indictment, on November 2 at approximately 10 a.m., Omar Alfrouk Abidaya, 22, of Jebl Mukaber, approached the 45-year-old Orthodox woman clothed in traditional Jewish garb, as she talked to an American couple she was guiding.After identifying her as Jewish, Abidaya said “excuse me,” at which time the woman turned to face him. He then proceeded to beat her over the head with the bottle, which shattered during the attack.When the woman fell to the ground, Abidaya fled the area and was apprehended moments later by Border Police officers stationed in the area. He remains in police custody, the indictment continued.The woman, who was lightly wounded, was treated at the scene by Magen David Adom paramedics before being transferred to Hadassah-University Medical Center in Ein Kerem.A judge has requested an extended remand against Abidaya until he is tried in the case.