Hamdallah also renewed his support for a two-state solution that establishes an independent Palestinian state along 1967 borders with east Jerusalem as its capital. 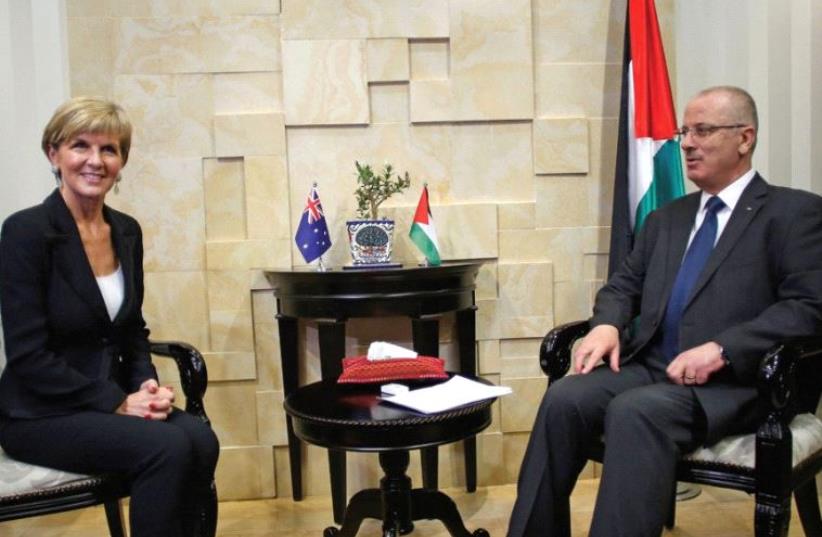 AUSTRALIAN FOREIGN MINISTER Julie Bishop meets with Palestinian Authority Prime Minister Rami Hamdallah in Ramallah yesterday.
(photo credit: REUTERS)
Advertisement
Palestinian Authority Prime Minister Rami Hamdallah told Australian Foreign Minister Julie Bishop on Monday that settlement activity is threatening the two-state solution during a meeting in Ramallah.“Prime Minister Rami Hamdallah said that Israel, by continuing its settlement construction and seizing land, is putting an end to the two-state solution and moving toward a one state [reality] based on racist division,” Wafa, the official Palestinian Authority news site reported.Just yesterday, Bishop called on Israel and the Palestinians to refrain from taking “any unilateral action that is seen as damaging the peace process” including unilateral Palestinian actions to achieve statehood as well as Israeli settlement construction.Hamdallah also renewed his support for a two-state solution that establishes an independent Palestinian state along 1967 borders with east Jerusalem as its capital, according to the official PA news site.At the conclusion of the meeting, Hamdallah said that the international community should play a greater role in pressuring Israel.“The prime minister spoke about the importance of the international community pressuring Israel to end its control of Area C that constitutes 64 percent of the West Bank,” the Wafa report stated.Jamal Dajani, director of strategic communications and media for Hamdallah, told The Jerusalem Post that the meeting largely focused on settlement building.Bishop met with Prime Minister Benjamin Netanyahu and President Reuven Rivlin in Jerusalem on Sunday.Dajani added that the results of Bishop’s meeting with Prime Minister Benjamin Netanyahu in Jerusalem were not discussed.Bishop began a two-day visit to Israel and the Palestinian territories on Sunday, after a 36-hour journey from Canberra.