It’s not clear at this stage whether the decision to deploy the guards was taken in coordination with the Palestinian Authority leadership, but PA officials have warned against any violence. 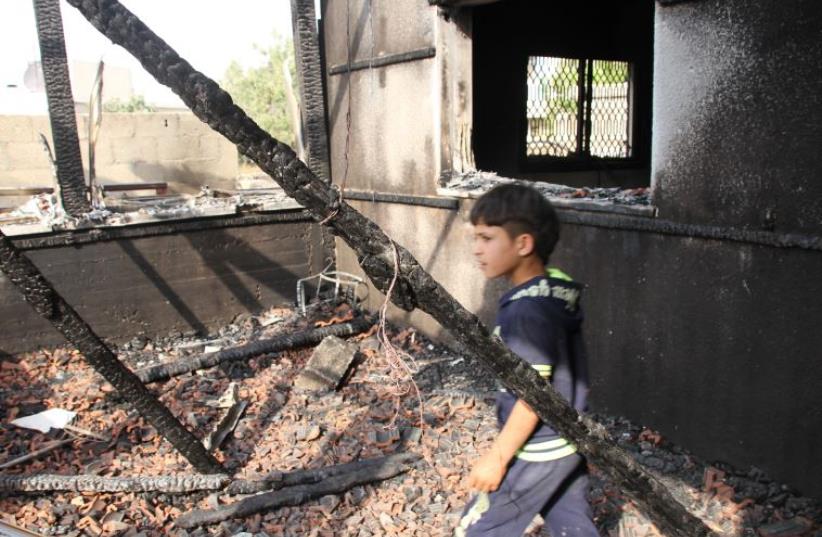 One of the boys from the family in Duma walks among the ruins
(photo credit: TOVAH LAZAROFF)
Advertisement
Palestinian activists said Tuesday they were planning to establish committees to defend Palestinians in the West Bank against settler violence.The activists said the committees would deploy guards in various villages during the night to foil attacks by settlers.It is not clear at this stage whether the decision to deploy the guards was made in coordination with the Palestinian Authority leadership.
Terror attack in Duma
Meanwhile, the PA government in the West Bank launched a scathing attack on Israel Tuesday and accused it of committing crimes against Palestinians.During its weekly meeting in Ramallah, the government, headed by Prime Minister Rami Hamdallah, called on the international community to declare “settler gangs” terrorist groups.It also called for condemning settlements as a “war crime.”The PA government said that the “occupation and settler gangs have stepped up their heinous crimes” against Palestinians with the arson attack that killed toddler Ali Dawabsha in the West Bank village of Duma last Friday. It also noted that IDF soldiers had shot and killed three Palestinian youths in recent days.“The crimes of the occupation and settler gangs have become part of the daily life of Palestinians,” the government charged. “These crimes are an extension of the practices of the occupation authority and Israeli governments, which insist on increasing settlement construction, rewarding the settlers and providing them with protection and immunity.”However, Fatah leader Jibril Rajoub, who also heads the Palestinian Football Association, said the PA leadership was opposed to any armed attack on Israel in retaliation for the murder of Dawabsha.Rajoub said that the PA would not support any attack to avenge the baby’s death. He said the PA would also continue to work against anyone who tried to thwart its political agenda.Rajoub added that he was encouraged by Israelis’ response to the arson attack, but did not believe the condemnations issued by the Israeli government.