'A declaration of war on the Palestinians' 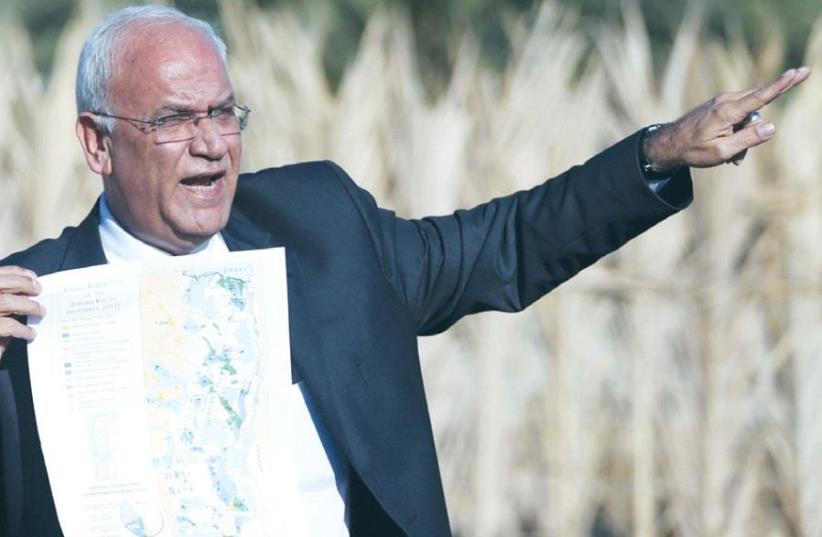 SENIOR PLO OFFICIAL Saeb Erekat speaks to reporters about Israeli appropriation of West Bank land, near Jericho last year.
(photo credit: REUTERS)
Advertisement
Palestinian officials warned over the weekend that US President Donald Trump’s plan for Mideast peace, which is expected to be announced on Tuesday, would spark a new wave of mass protests in the West Bank and Gaza Strip.
The officials said the Trump administration did not inform the Palestinians of its intention to publish the plan, also known as the “Deal of the Century.”
Emphasizing that the plan would not change the reality on the ground as far as the Palestinians are concerned, the officials called for a series of protests to foil the “Zionist-American conspiracy.”
A PA official in Ramallah warned that Israel and the US were “playing with fire.” The official said that the Palestinian leadership will meet in the coming days to discuss ways of responding to the Trump plan. “We are headed toward a dangerous escalation,” he cautioned.
According to the official, the Palestinian leadership is “facing huge pressure from the street to take tough measures, especially halting security coordination with Israel.”
PLO Secretary-General Saeb Erekat said on Saturday that “any deal, attempt or dictation that ignores the fact that Israel is an occupying power of the state of Palestine, will be recorded in history as the ‘fraud of the century.’”
Erekat said that what the Trump administration has done so far, “and the full partnership with [Prime Minister Benjamin] Netanyahu will enter history as the ‘fraud of the century’ against international law, UN resolutions, and the terms of reference of the peace process.”
Nabil Abu Rudaineh, spokesman for the Palestinian Authority presidency, repeated the Palestinians’ rejection of Trump’s plan. He said there have been no contacts between the PA and the US administration concerning the plan.
The PA has been boycotting the US administration since Trump’s December 2017 decision to recognize Jerusalem as Israel’s capital.
PLO Executive Committee member Hanan Ashrawi pointed out that the timing of the announcement of Trump’s plan coincided with the Knesset’s vote on Netanyahu’s request for immunity from prosecution on charges of bribery, fraud and breach of trust.
“Add to it Trump’s impeachment issues and you have a lethal diversionary tactic at the expense of Palestinian rights and international law,” she wrote on Twitter.
Osama Qawassmeh, a spokesman for the ruling Fatah faction, denounced Trump’s plan as the “deal of shame” and said the timing of its publication was designed to help Netanyahu in the general elections in March.
Qawassmeh warned of the “destructive consequences” of the US administration’s policies. “They won’t find one Arab leader who would buy their corrupt merchandise,” he added. “The US and Israel don’t own Palestine to determine the fate of its heroic people.”
Another PLO official, Wasel Abu Yusef, said Trump’s plan was tantamount to “waging open war” on the Palestinians. The Palestinians, he said, won’t accept any plan that aims to end the Palestinian cause.
Two PLO groups, the Popular Front for the Liberation of Palestine and Democratic Front for the Liberation of Palestine, on Saturday warned about the “dangers” facing the Palestinians as a result of Trump’s peace plan.
The groups called for a popular uprising against the US and Israel. They condemned the plan as a “new conspiracy against the Palestinian people and their cause.”
Hamas and Palestinian Islamic Jihad also repeated their rejection of Trump’s upcoming plan, saying it won’t pass.
Hamas spokesman Fawzi Barhoum denounced the plan as a “Zionist-American plot to liquidate the Palestinian issue.” He called on the PA leadership to respond with a series of measures, including halting security coordination with Israel in the West Bank.
Senior Hamas official Khalil al-Haya dismissed Trump’s plan as “Zionist and American dreams and illusions.” He and other Hamas officials vowed to thwart the plan.
PIJ representative Yusef al-Hasayneh said the US administration was “acting with a mentality of piracy, legalizing the theft of the land of Palestine and its holy sites.” The US, he added, is “deceiving the world by claiming that it seeks a solution to the Palestinian issue.
Another PIJ official, Mohammed al-Hindi, said the “talk about the ‘Deal of the Century’ aims to liquidate what is left of the Palestinian cause.” He predicted that matters were headed toward escalation in the aftermath of Trump’s decision to release his peace plan.
“The hypocrites in the West don’t give the weak people their rights,” Hindi said. “The battle is open-ended and lengthy. There is great readiness for sacrifices.”