Chief Palestinian negotiator says he was informed of the move on the disputed issue by American's peace team. 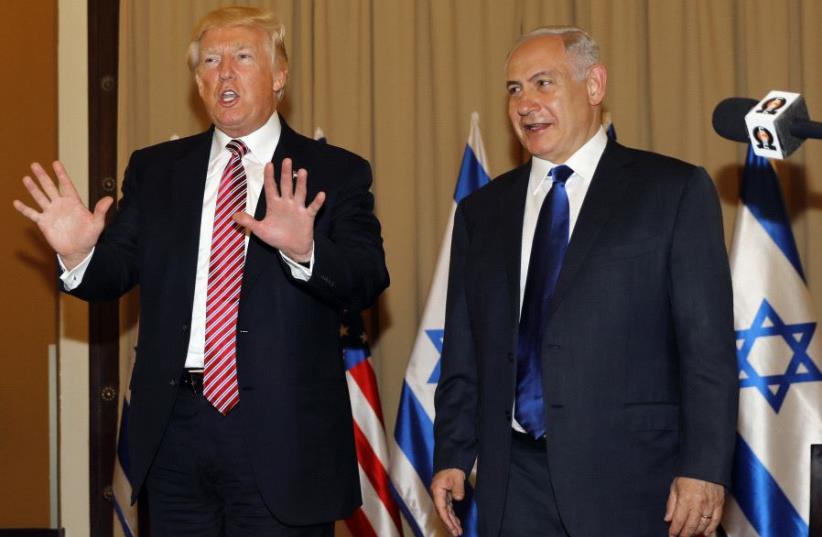 Israel's Prime Minister Benjamin Netanyahu (R) and US President Donald Trump speak with the press in Jerusalem on May 22, 2017.
(photo credit: MENAHEM KAHANA / AFP)
Advertisement
US President Donald Trump’s Middle East peace team told Prime Minister Benjamin Netanyahu that settlement construction must be limited, chief Palestinian negotiator Saeb Erekat said he was informed on Tuesday by the American team.Erekat, Palestinian Authority General Intelligence Services chief Majid Faraj, and Palestine Investment Fund chairman Muhammad Mustafa met two members of Trump’s Middle East peace team, Jason Greenblatt and David Friedman, on Tuesday at the King David Hotel in Jerusalem.“We discussed the issue [settlements] for a long time and...they [the Americans] said they told Netanyahu that restricting settlement construction is necessary,” Erekat told the Voice of Palestine, an official PA radio station, on Wednesday.
But an administration source familiar with the meeting questioned Erekat's remarks on Wednesday. "That conversation never took place," the source said.Greenblatt, the Trump administration official most intimately involved in discussions with Israelis and Palestinians, unsuccessfully tried to reach understandings with Netanyahu several months ago over curbing settlement construction. However, in what was seen as a gesture to the Trump administration, Netanyahu announced in March that Israel would restrict building to “existing developed areas [of settlements] as much as possible.”
Trump tells Israel to "hold back on settlements" during meeting with Netanyahu at White House on Feb. 15, 2017 (credit: REUTERS)
Erekat added that he asked the American officials he met on Tuesday if settlements are illegitimate, but said they did not respond.At a meeting with diplomats in Ramallah on Wednesday, Erekat said that “Israeli settlements are not just an obstacle – they destroy peace.”Israel maintains that Palestinians who incite to violence and reject accepting Israel as a Jewish state are the primary obstacles to peace.Ahmad Majdalani, a confidant of PA President Mahmoud Abbas, told The Jerusalem Post that the meeting between Trump’s peace team and the Palestinian officials on Tuesday was “routine.”“Our leaders emphasized the necessity of the two-state solution and halting all settlement building,” Majdalani said. “But we still have not heard from the American side exactly where they stand on the two-state solution and settlement building.”Majdalani added that “there is no reason to hold negotiations without a clear framework,” one that addresses both the two-state solution and settlement building.Greenblatt and Friedman met with Netanyahu on Wednesday at the Prime Minister’s Office in Jerusalem.Greenblatt is scheduled to meet Abbas on Thursday, according to a report in Al-Quds, a Palestinian daily.Michael Wilner contributed to this report.