PLO ambassador endorses Protocols of the Elders of Zion

At speech in Santiago, Palestinian representative to Chile denies existence of the Jewish people. 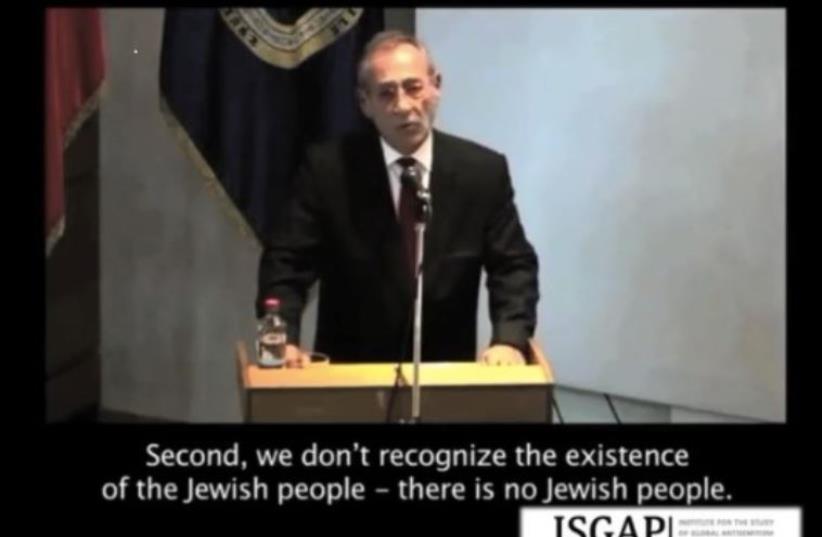 PLO Ambassador to Chile Imad Nabil Jada at a speach in Santiago
(photo credit: screenshot)
Advertisement
The Jewish people does not exist, PLO Ambassador to Chile Imad Nabil Jada’a told an audience during a talk he gave in Santiago this May, according to a video released by the Institute for the Study of Global Anti-Semitism and Policy.Addressing members of the “Gran Logia” Masonic Lodge, Jada’a said that Palestinians “don’t recognize the existence of the Jewish people” as there is not, in fact, any such people.“This is not my personal analysis. Here we can refer to the Jewish Israeli professor from the University of Tel Aviv, Dr. Shlomo Sand, in his book ‘The Invention of the Jewish People.’ A Jew with Israeli passport announces that, the so-called Jewish nation is a made up invention. Because a religion cannot be a people,” he said.
"The Protocols of the Elders of Zion" PLO Ambassador to Chile, Mr. Imad Nabil Jada'a from ISGAP on Vimeo.
Sand believes that contemporary Jews are descended from the Khazar people from the Caucasus and are not connected to the Biblical Israelites. His ideas are widely opposed both in academia and among Jews.“Until 1896 when a group of academic intellectuals, financial advisers, majority being non-Jewish Europeans, decided to create the Zionist movement with one pretext/excuse; the creation of a homeland for the Jewish people. Although the truth is that this (the goal) is to protect their plans of dominating life in the entire planet,” he added.Jada’a also recommended that his listeners read the The Protocols of the Elders of Zion, a Czarist forgery published in the early 20th century purporting to expose the inner workings of a global Jewish conspiracy.“We know from history that anti-Semitism begins with Jews but never ends with Jews,” said Dr. Charles Small, the director of ISGAP.“For too long Palestinian and western leaders have been tolerating the intolerable i.e. Incitement to genocidal anti-Semitism as prescribed by the Muslim brotherhood, some Palestinian leadership and other Islamists. Tolerating the intolerable social movements is leading to carnage throughout the region. It's  time for responsible leaders to put an end to this spreading disease of hatred at the regional level and at the international levels.”