According to the Lach Jerusalem organization, the flag was put up by Fatah activists next to the Damascus Gate which heads into the Old City. 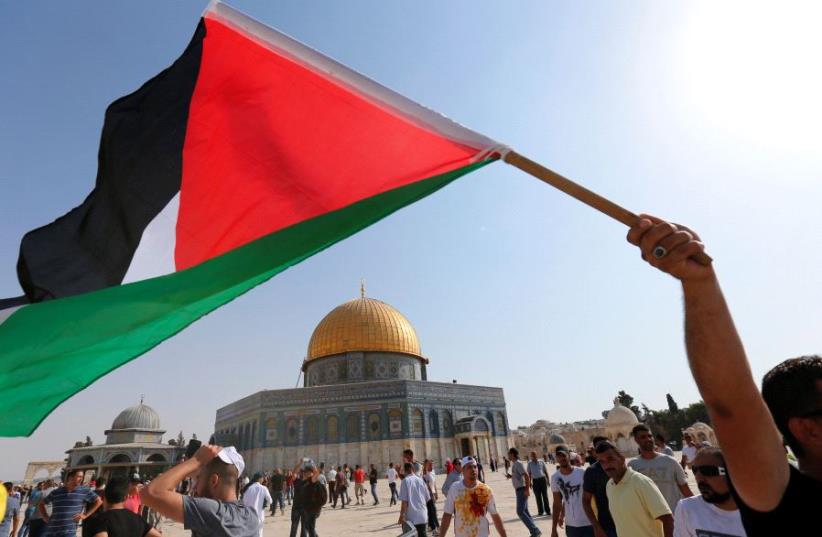 The Dome of the Rock is seen in the background as a man waves a Palestinian flag upon entering the Temple Mount, after Israel removed all security measures it had installed at the compound, in Jerusalem's Old City July 27, 2017.
(photo credit: REUTERS)
Advertisement
The flag of the Palestine Liberation Organization, featuring the faces of its former leader Yasser Arafat and current chairman Mahmoud Abbas, was hoisted over the walls of the Old City of Jerusalem on Wednesday.According to the Lach Jerusalem organization, the flag was put up by Fatah activists next to the Damascus Gate which heads into the Old City.Jerusalem Mayor Moshe Lion said, in response to the incident, “The only sovereign power in Jerusalem is the Israeli sovereignty. I will not allow any organization to try and get a foothold in the city. We will stand firm before anyone who tries to challenge the sovereignty of the State of Israel in Jerusalem. Immediately after the hoisting of the flag, urban enforcement employees spotted the nuisance and quickly cooperated with Israel Police to remove the flag immediately.”Israel Police has opened an investigation into the incident.
Fatah commemorated 55 years since its founding as a political party in 1965 on Wednesday.Fatah’s secretary-general in Jerusalem, Shadi Mtour, was arrested on Wednesday in an effort to prevent any activities in Jerusalem to celebrate Fatah’s anniversary, according to the Palestinian Wafa news agency. Two other Fatah activists were also arrested. Fatah banners in various neighborhoods in Jerusalem were taken down by police.A 1994 law passed by the Knesset bans the Palestinian Authority from carrying out activities within Israeli territory.“When Fatah was launched, it was described by some as the revolution of the impossible and it cannot endure. But it has endured and will continue to endure because it counts on the will of the fighting Palestinian people,” said Abbas at a ceremony commemorating the anniversary of the party’s founding on Tuesday.