Netanyahu was recalling the siege of the Cairo Embassy where six security officers were holed up behind a metal door in a safe room in the building, while a mob rampaged through the premises. 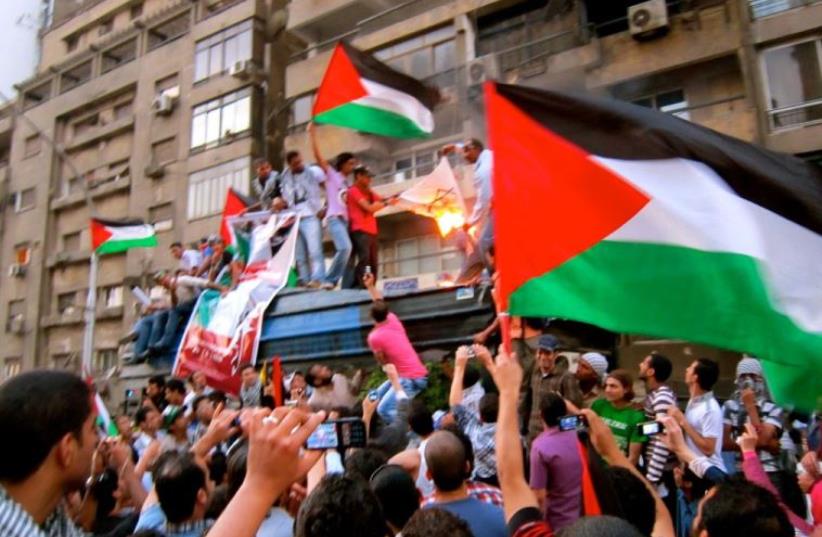 Burning the Israeli flag at Israel's embassy in Cairo, 2011
(photo credit: GIGI IBRAHIM FROM CAIRO/WIKIMEDIA)
Advertisement
Following wide coverage in the Egyptian press of Prime Minister Benjamin Netanyahu’s comment Tuesday that Israel threatened to send commandos to extract besieged personnel from its Cairo Embassy in 2011, the Prime Minister’s Office issued a clarification to give the comment some “context.”Netanyahu, at a ceremony at the Foreign Ministry commemorating Israeli diplomats killed abroad, said the threat to send commandos in September 2011 is what eventually compelled then Egyptian head of state Mohamed Tantawi to send in crack Egyptian forces to rescue the men.Netanyahu was recalling the siege of the Cairo Embassy where six security officers were holed up behind a metal door in a safe room in the building, while a mob rampaged through the premises.“A mob came to slaughter our people, and we used all the tools at our disposal that night, including the threat of [a] rescue operation by the IDF, which finally tipped the balance and led the Egyptian forces – then under the rule of the Muslim Brotherhood, together with careful coordination from here – that ultimately led to the successful conclusion of this event,” he said.This was the first time Israel acknowledged that it threatened to send in IDF forces to extract the men, and it caused a furor in the Egyptian press. As a result, the PMO issued the following clarification: “Israel’s policy is to defend its citizens threatened anywhere. In the case being discussed, the intention was a coordinated action, and not a unilateral one. We are glad there was no need for this, and thank the Egyptian army that dealt in a responsible manner with the crisis, and led to solving the problem.”Reflecting the sensitivity of the ties with Egypt, the statement added that Netanyahu “very much appreciations the ties with Egypt, and the maintenance of the peace treaty, which is an important layer of regional security.”One government official said Jerusalem did not, to his knowledge, receive complaints about the matter from the Egyptian government.Up until Netanyahu’s comments, the accepted narrative had been that the Egyptians acted thanks to the direct intervention of US President Barack Obama.Indeed, Netanyahu – after the men were extracted from the building by Egyptian forces – offered a special thank you on television to Obama who “said he would do everything he could” to extricate the six security guards, “and did.”“He used all the means and influence of the US, which are significant, and I think we owe him a special thank you. This testifies to the strong alliance between Israel and the US. This alliance is critical, especially during these days of great storms buffeting the Middle East,” the prime minister said at the time.At Tuesday’s ceremony, Netanyahu said that he spoke by phone during the incident with a security guard named Yoni and promised him, “Yoni, the State of Israel will get you out of there.”Since the establishment of the state, 16 foreign service personnel have been assassinated abroad. Netanyahu said Israel’s diplomats are subject to threats by those who want to harm Israel’s relation with the nations of the world.“Our representative are there to deflect political and propaganda attacks, and precisely because of this they are liable to turn into targets for physical attacks,” he said.